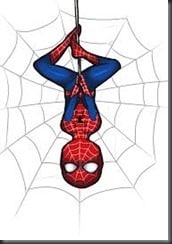 In a case involving competing Spider-Man web-shooter toys, the Ninth Circuit Court of Appeals has refused to enforce a hybrid intellectual property agreement involving a bundle of patent, trade secret, and other IP rights.

Around 1990, Stephen Kimble invented a toy that allowed users to emulate Spider-Man with a web-shooter that used foam string. His US Patent No. 5,072,856 expired in 2010.

Also in 1990, Kimble met with the president of Marvel’s predecessor company to discuss the then-pending ‘856 patent. The president expressed a lack of interest in the web-shooter, but Marvel later introduced a similar toy.

In 1997, Kimble sued Marvel for patent infringement. In 2001, the parties agreed to settle the case while appeals were still pending. The settlement agreement included 3% of “net product sales” of the Marvel web-shooter, and Marvel eventually paid Kimble more than $6 million in royalties.

When disputes arose over royalty payments, Marvel reasserted its view that its product didn’t infringe the ‘856 patent. It also contended that it wasn’t obligated to pay royalties after the ‘856 patent expired. The Arizona district court found that the settlement agreement was a “hybrid” rights agreement and that royalty payments could not be collected after the patent expired.

The Ninth Circuit agreed, citing the US Supreme Court’s decision in Brullote v. Thys Co., 379 U.S. 29 (1964) that charging patent royalties beyond the date a patent expires is “unlawful per se.”

However, the Ninth Circuit wasn’t happy about the result, noting that it arguably deprived Kimble of the benefit of his bargain based on a technicality, and that he would have sought a higher royalty rate had be known of the impact of Brulotte at the time he entered into the settlement with Marvel.