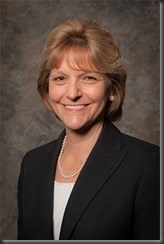 Margaret (Peggy) Focarino, 58, the new Commissioner for Patents at the US Patent and Trademark Office (USPTO) oversaw a variety of reforms while she served as Deputy Commissioner under former USPTO Director David Kappos.

In 2009, when Kappos became director and Focarino became Deputy Commissioner, the USPTO’s process for reviewing patents hadn’t changed in three decades. The office’s backlog was huge and growing.

The result was a reduction in the backlog of patents from 750,000 in 2009 to less than 590,000 by August of 2013, even as applications increased by an average of five percent per year. Attrition among examiners also decreased.

Forcarino also oversaw the introduction of new procedures to measure the quality of patent examination.

For her accomplishments, Focarino received the Department of Commerce Silver Medal for Leadership in 2010.

Focarino, who has a degree in physics from the State University of New York, started her USPTO career as a junior patent examiner in 1977 – one of two women out of the ten patent examiners hired that year. (In more recent years, the USPTO has hired about 1,200 patent examiners annually.) She is the first female Patent Commissioner.

As Commissioner, Focarino acts as the chief operating officer for the USPTO, overseeing the nine Patent Technology Centers and coordinating the patent application examination process. She also led the “road show” to open new patent offices in 2012.