Typo In The Patent Law?

Gives those who challenge patents

One bite at apple 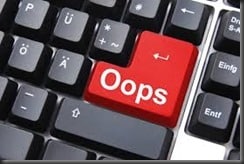 The America Invents Act (AIA), which substantially reformed the US patent system for the first time in 60 years, was passed in September of 2011 and is gradually being implemented.

However, one aspect of the AIA is widely considered to be a mistake – a “scrivener’s error” (aka a “clerical error” or a “typo on steroids”).

The AIA created a new way for third parties to challenge patents within the first nine months after they are granted, so that over-broad or questionable patents wouldn’t lurk like land mines waiting to blow up in the faces of unwitting infringers. If the Patent Office agrees to review such a challenge, it is required to respond to issue a decision within a year.

However, instead of encouraging early challenges to weak patents, the AIA is actually having the opposite effect. This is because it only provides challengers with one bite of the apple, either at the Patent Office or in court.

The language at issue reads:

(2) CIVIL ACTIONS AND OTHER PROCEEDINGS.–The petitioner in an inter partes review of a claim in a patent under this chapter that results in a final written decision under section 318(a), or the real party in interest or privy of the petitioner, may not assert either in a civil action arising in whole or in part under section 1338 of title 28 or in a proceeding before the International Trade Commission under section 337 of the Tariff Act of 1930 that the claim is invalid on any ground that the petitioner raised or reasonably could have raised during that inter partes review.

Companies that license patents were concerned that the AIA might encourage third parties to make multiple attacks on the same patents, creating constant uncertainly for the patent owners. To address that concern, Congress included a provision in the act saying that if a party challenged a patent’s validity at the Patent Office it couldn’t use the same arguments in federal court.

However, word-smithing the final language of the Act led to the addition of the “reasonably could” clause, which is “widely recognized” as a mistake, according to Teresa Stanek Rea, the deputy director of the Patent Office.

Congress, the White House, and the Patent Office are all working on a fix.