To the entire patent

Not just to some claims 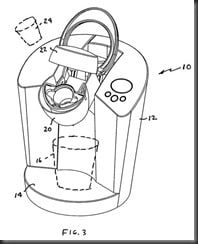 The US Court of Appeals for the Federal Circuit has affirmed that patent rights for a method claim are exhausted by the sale of a machine that substantially embodies the method.

In Keurig, Inc. v. Sturm Foods, Inc., Keurig held US Patents 7,165,488 and 6,606,938, which covered coffee brewers and methods of brewing coffee from disposable cartridges. Keurig sued Sturm Foods, alleging that Sturm was liable for contributory infringement of these patents.

Sturm sold replacement coffee cartridges for use in some Keurig coffee machines. Keurig claimed that the cartridges infringed the method claims of the patents at issue.

Sturm asserted the defense of patent exhaustion and moved for summary judgment of non-infringement. The district court granted this, concluding that the exhaustion of Keurig’s patent rights had been triggered by its initial sale of a patented item that practiced the claimed invention – i.e., the coffee brewer.

Keurig appealed, arguing that the district court had erred by failing to apply the substantial embodiment test in the US Supreme Court’s Quanta Computer case.

Keurig argued that under the Quanta test its rights were not exhausted because the coffee brewers were capable of uses that didn’t infringe the method claims. Specifically, the brewers could be used with cartridges with pre-made holes (in addition to cartridges that were pierced during the brewing process). Keurig contended that exhaustion must be determined on a claim-by-claim basis.

Sturm argued that Quanta was not applicable and that the use of a Keurig brewer with a non-Keurig cartridge could not be infringement because Keurig’s sale of the brewers exhausted its patent rights in the methods.

The Federal Circuit agreed with Sturm, noting that the doctrine of patent exhaustion provides that the unconditional sale of a patented device exhausts the patent holder’s right to control the buyer’s use of the patented item. This is because the patent holder has already received full value for the item.