But will it hold up? 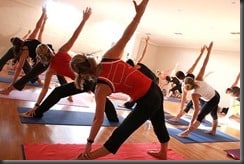 The US Patent and Trademark Office (USPTO) has approved a patent for a “Method and apparatus for yoga class imaging and streaming” (U.S. Patent No. 8,605,152).

According to the abstract:

The patent also includes claims for streaming the video over the internet, adding music to the audio, and placing the instructor’s mat in the instructor’s position and a student mat in each student position.

Thus, yoga studios that record their classes may find themselves subject to patent infringement suits by the patent’s owner, a company called YogaGlo.

YogaGlo revised its claims to expressly note that the camera used to record classes must "provide a participatory view from a height of about three feet," with “participatory view” defined as “a view observed by a participant in the rear of the class."

The revised application was approved.

However, the Yoga Alliance claims that YogaGlo was using its now-patented method more than one year before it applied for its patent, which would make the patent unenforceable if challenged. It will be interesting to see how this patent stands up.