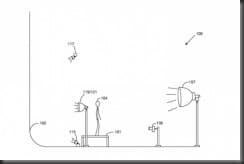 On March 18, Amazon was issued a patent for “Studio arrangement” – an invention that includes:

According to some reports, Amazon claimed to have invented the idea of taking a photo against a white background in a photography studio.

However, the patent is a bit more specific than that.

Patent claim 1 only applies if all of the following conditions exist:

In other words, Amazon doesn’t seem to be claiming the idea of taking photos against white backgrounds in general, but a specific combination of elements that produce the “perfect” photo against a white background.

When word got out about the patent, Amazon was roundly mocked for filing the patent, and the US Patent Office was comparably abused for granting it.

Even Stephen Colbert on the Colbert Report got into the act – and claimed that he had filed a patent for the idea of filing patents.

Since the Amazon patent application discloses a particular arrangement of light sources, subject, and background, some commentators questioned how Amazon could possibly enforce it, since those “behind the scenes” arrangements would not be obvious from the finished photographs.

Or will Amazon’s famous delivery drones be deployed to spy on photographers?

You can view the Colbert Report video here: