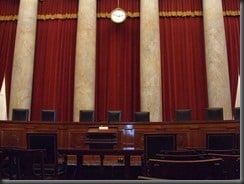 As we previous reported, the US Supreme Court agreed to review the Federal Circuit’s decision that a patent was not invalid as “insolubly ambiguous.”

The case of Nautilus v. Biosig involved a patent for a heart rate monitor mounted on the handles of exercise equipment.

According to the patent, prior heart rate monitors were often inaccurate because of the presence of other electrical signals generated by the user’s skeletal muscles. The invention claimed to improve the detection and processing of electrocardiograph signals.

Claim 1 of the patent refers to

a cylindrical bar fitted with a display device; “electronic circuitry including a difference amplifier”; and, on each half of the cylindrical bar, a “live” electrode and a “common” electrode “mounted . . . in spaced relationship with each other.”

The Federal Circuit found that a person “skilled in the art” would know what “spaced relationship” meant and thus the claim was sufficiently definite.

The Supreme Court found that the Federal Circuit’s standard that patents could only be found invalid as indefinite if they were “insolubly ambiguous” was too favorable to patent owners.

According to the Supreme Court,

A patent is invalid for indefiniteness if its claims, read in light of the patent’s specification and prosecution history, fail to inform, with reasonable certainty, those skilled in the art about the scope of the invention… The Federal Circuit’s standard, which tolerates some ambiguous claims but not others, does not satisfy the statute’s definiteness requirement…. To tolerate imprecision just short of that rendering a claim “insolubly ambiguous” would diminish the definiteness requirement’s public-notice function and foster the innovation-discouraging “zone of uncertainty.”

The Court then remanded the case to the Federal Circuit for reconsideration.

Amazon and Google were among the companies that filed amicus briefs supporting Nautilus, saying that they had often been targeted by non-practicing entities (sometimes called “patent trolls”) for alleged infringement of software patents with vague claims.