Tesla All About Sharing Technology

It won’t enforce its patents; 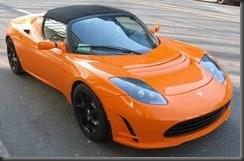 Tesla CEO Elon Musk announced on his company blog that “Tesla will not initiate patent lawsuits against anyone who, in good faith, wants to use our technology.”

However, Musk did not define what “in good faith” means.

Tesla makes electric sports cars and sedans, which sell for $69,000 and up. Its Model S was voted Motor Trend’s Car of the Year in 2013, and its gull-wing crossover SUV is hotly anticipated for 2015 and expected to become Tesla’s best-selling car to date.

In his post entitled “All Our Patent Are Belong To You” (a reference to an Internet meme), Musk said:

Tesla Motors was created to accelerate the advent of sustainable transport. If we clear a path to the creation of compelling electric vehicles, but then lay intellectual property landmines behind us to inhibit others, we are acting in a manner contrary to that goal. Tesla will not initiate patent lawsuits against anyone who, in good faith, wants to use our technology.

He said that the Tesla patents that used to hang on the walls of the company’s Palo Alto headquarters had been removed.

Musk said that Tesla had patented its technology out of concern that bigger companies would copy it and overwhelm Tesla.

But “We couldn’t have been more wrong,” he said.

The unfortunate reality is the opposite: electric car programs (or programs for any vehicle that doesn’t burn hydrocarbons) at the major manufacturers are small to non-existent, constituting an average of far less than 1% of their total vehicle sales.

Even before it decided not to enforce its patents, Tesla inspired other companies to enter the electric car field:

Other companies including Google, Twitter, and Sun have also made decisions not to enforce certain patent rights. Often, the reason for agreeing not to assert a patent is to create an industry standard.

Building a business on an open-source model, as in the case of Android, can also lead to lower prices for consumers and speed the wide adoption of new technologies.

However, giving up patent rights certainly isn’t a viable strategy in all situations, and most companies will find that they’re better off holding on to, and enforcing, their patents.