Did “Call of Duty” Besmirch Noriega?

Claims that “Call of Duty” stole

His name and image 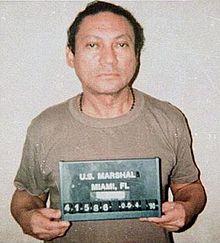 Former Panamanian dictator Manuel Noriega has sued the maker of the “Call of Duty” video game, claiming that the company illegally copied his name and likeness without his permission.

Activision Blizzard, Inc., a California company, makes the “Call of Duty” series and earned more than $1 billion worldwide in just the first few weeks after the release of the latest installment.

The ninth title in the “Call of Duty” series, called “Black Ops II,” features a character called Noriega who looks like the plaintiff, according to the complaint.

Noriega, 80, claims that the game portrays him as a “kidnapper, murderer and enemy of the state” and that the video game damaged his reputation.

The real Noriega seized power in a coup, made Panama a haven for drug traffickers, was deposed as part of a 1989 US invasion, and is in prison in Panama. He previously served a 20-year sentence in the US for racketeering, drug trafficking, money laundering, and other crimes.

Noriega’s complaint is for the violation of his common law right of publicity. He is seeking compensation for the use of his likeness, damages for unjust enrichment, attorneys’ fees, and court costs.

In related news, Lindsay Lohan sued Rockstar Games and its owner Take-Two Interactive Software Inc. over the use of what she says is her image in the videogame “Grand Theft Auto V.”

Lohan claims that the game character Lacey Jonas is based on her and that the game company“incorporated her image, likeness, clothing, outfits, …clothing line products, ensemble in the form of hats, hair style, sunglasses, jean shorts worn by Plaintiff that were for sale to the public at least two years before the Defendant’s release of the GTA V game.”

The game character is an actress who complains about being pursued by paparazzi. She also appears on the cover of the game package.