Who owns rights to the photo?

The US Copyright Office has decided that a selfie taken by a monkey is not eligible for copyright protection under US law. The issue arose because British wildli 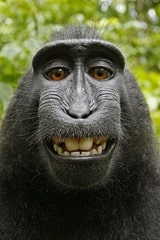 fe photographer David J. Slater claimed that he owned the rights to a self-portrait of a female Celebes crested macaque (Macaca nigra). The monkey took the photo of herself with Slater’s camera. Slater requested that the Wikimedia Foundation remove the photo of the monkey (shown above) from Wikimedia Commons. The foundation refused, saying that copyright belonged to the “person” who took the photo and in this case there was no person – monkeys not being recognized as “persons” under the law.

Slater argued that the monkey was his “assistant,” and that if he had a human assistant to help him take photos he would still own the copyrights in the resulting images. The US Copyright Offices recently updated its rules and regulations to make explicit that works produced by nature, animals, or plants are not protected by copyright, nor are works “purportedly created by divine or supernatural beings” (ghosts, for example). However, the Office may register a work “where the application or the deposit copy(ies) state that the work was inspired by a divine spirit.” (Emphasis added.)

The draft Compendium of Copyright Office Practices says (in Section 202.02(b)):

Human author: The term “authorship” implies that, for a work to be copyrightable, it must owe its origin to a human being.

The Copyright Office gives the following examples of “works produced by mechanical processes or random selection without any contribution by a human author” and thus not registrable:

• A photograph taken by a monkey.

• A mural painted by an elephant.

• A claim based on the appearance of actual animal skin.

• A claim based on driftwood that has been shaped and smoothed by the ocean.

• A claim based on cut marks, defects, and other qualities found in natural stone.

Medical images produced by “x-rays, ultrasounds, magnetic resonance imaging, or other diagnostic equipment” are also not capable of being registered for copyright protection. Presumably, an image of the Virgin Mary on toast would also be unprotected.