How Much Does A Nobel Prize Winning Patent Sell For?

But invention sells for just 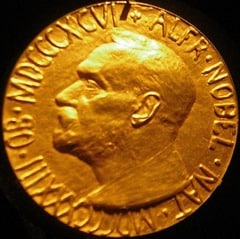 rights to his invention for $180. This year’s physics prize is shared by Isamu Akasaki of Meijo University, Hiroshi Amano of Nagoya University, and Shuji Nakamura of UC-Santa Barbara. They were recognized for their work on the “blue LED problem.” Red LEDs were invented in the 1950s. Green followed. But it took until 1992 for the inventors to create the first blue LED. Introducing the blue LEDs made it possible to create full-color LED screens and also to use colored LEDs to produce white light – and thus white LED light bulbs. (LED light bulbs produce white light by combining all three colors.) LED bulbs are energy-efficient and long-lasting, and they give off a “warmer” light than compact fluorescent bulbs. The men also independently invented blue semiconductor lasers, which led to Blu-ray movie disc technology.

At the time of his invention, Nakamura, who now holds more than 100 patents, was working for Nichia Chemicals in Tokushima, Japan. Under Japanese law, patents are granted to researchers who make the discoveries that lead to patentable inventions. However, inventors may transfer their rights to a corporation in exchange for undefined compensation, which is typically nominal. Nakamura received $180 (some sources say $170 or $200) for his invention. After leaving Japan for the US, he sued Nichia in 2001 for $16 million in additional compensation. Nakamura estimated that Nichia’s sales of LEDs made using his invention were $400 million in 2000.

In 2004, the Tokyo District Court found that Nichia earned more than $1.1 billion in profits from Nakamura’s blue LEDs and awarded him $180 million in compensation – a million times more than he originally earned. The parties settled in 2005 for the equivalent of about $9 million, which at the time was the largest bonus paid by a Japanese company to an inventor.

This year’s Nobel Prize for Physics is unusual in that it recognizes an invention that is practical, rather than theoretical. Last year’s prize went to the discoverers of the Higgs boson, which seems unlikely to have consumer applications any time soon.