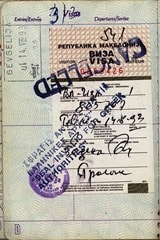 certain types of patent applications for slow-track treatment. As we previously discussed, since 1994 the USPTO had a program known as the Sensitive Application Warning System (SAWS) to deal with “controversial or inconvenient” patents. Patents put on the SAWS track included ones dealing with abortion, AIDS vaccines, suicide machines, smart phones, and anything considered “pioneering.” The details of the SAWS program were kept secret until revealed pursuant to a Freedom of Information Act request by attorneys at a US intellectual property law firm. The attorneys became aware of the program when a patent examiner let slip a reference to it. The attorneys said that the intent of the program appeared to be to help the Patent Office avoid embarrassment. The revelation of the existence of the program led to considerable discussion in the patent community.

The Patent Office denied that the SAWS program was actually “secret,” although neither patent applicants nor patent attorneys were informed when their applications were assigned to the program. Concerns about the impact of the program were muted somewhat when the USPTO disclosed that only .04% of all patent applications were routed to the SAWS program. The public exposure led the USPTO to review the program and it recently posted the following notice on its website:

Upon careful consideration, the USPTO has concluded that the SAWS program has only been marginally utilized and provides minimal benefit.

Any patent applications previously assigned to the SAWS program will now be put on the regular track. Patent Commissioner Margaret Focarino said that any future similar “quality-enhancing” initiatives would be “disclosed to the public before implementation.”

We’re glad that the Patent Office made this sensible decision. Secret programs, or even somewhat secret programs, are inconsistent with government transparency and public accountability and are clearly inappropriate when it comes to protecting intellectual property rights.