What You May Not Know About Works for Hire…

On April 2, 2015, Robert Schuller, the televangelist who founded the Crystal 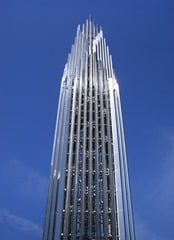 Cathedral in Southern California and spoke to millions of followers around the world on his Hour of Power TV show, passed away. He left behind an intellectual property dispute. Schuller left the position of senior pastor at Crystal Cathedral in 2005, under a “transition agreement.”

In 2010, Crystal Cathedral, facing debts including a $36 million mortgage and $7.5 million owed to other creditors, filed for bankruptcy.

In 2012, Schuller himself became a bankruptcy creditor. He filed a claim against Crystal Cathedral for $5 million, saying he was owed this for breach of the transition agreement and for use of his intellectual property, including his books and the Hour of Power show. Schuller admitted that he had granted a royalty-free “broad license” for his works, but said that the ministry exceeded the scope of this license by posting his works online.

A bankruptcy judge awarded the Schuller family $700,000 on the contract claims, finding that the intellectual property was a “work for hire” and thus owned by the church. Schuller appealed. The Ninth Circuit affirmed the award, finding that Schuller was owed nothing for the use of his likeness and other intellectual property. In February 2015, shortly before his death, Schuller appealed to the US Supreme Court.

Under copyright law, ownership of the work of authorship normally vests in the author. One exception is when a work was created by an employee in the course of his or her employment. In that case, the work is considered a “work for hire” and the copyright belongs to the employer.

However, in the Schuller case the issue of IP ownership was somewhat muddied. Crystal Cathedral had never claimed ownership of Schuller’s intellectual property before the bankruptcy dispute arose, but nor had Schuller claimed royalties for the church’s use of “his” IP.

Organizations can avoid or minimize disputes over intellectual property created by employees and contractors with clear IP assignments in employment agreements. Organizations that fail to do this may have a second chance to protect their rights in the context of a termination agreement.