The Ninth Circuit ruled that a sequence of 26 yoga poses and two breathing exercises isn’t entitled to copyright protection.

The copyright was claimed by Bikram Choudhury, known for the popular “hot yoga” method. 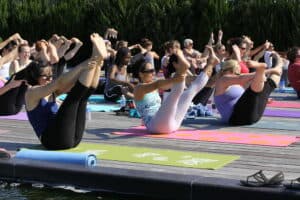 A “Bikram Yoga” session lasts 90 minutes and is conducted in a carpeted room heated to 105 degrees Fahrenheit. This is meant to approximate the Indian climate. Fans of the method say that the sweaty workout provides deep relaxation and eases sore muscles.

Choudhury moved from India to Beverly Hills in 1971 and became a well-known yoga teacher. In 1979, he published and registered the copyright for a book called Bikram’s Beginning Yoga Class, detailing the specific sequence of exercises used in his classes. In 2002, he also filed a copyright registration for the “compilation of exercises” in the book.

Many others, including former Bikram students, have also tried to offer hot yoga classes. Choudhury’s lawyers sent cease-and-desist letters to many of them, and some stopped teaching the classes.

In response to Choudhury’s legal actions, the US Copyright Office issued a policy stating that individual copyright poses weren’t eligible for copyright protection.

However, Choudhury pressed forward with his claims of owning the specific sequence of poses. He sued a former student who offered Bikram-style classes at his Evolution Yoga studio.

US copyright law excludes protection for

any idea, procedure, process, system, method of operation, concept, principle, or discovery, regardless of the form in which it is described, explained, illustrated, or embodied in such work.

The court ruled that the sequence was ineligible for copyright as an idea, and also wasn’t eligible as a sort of dance routine: