IS IT A TRANSFORMATION

MAYBE, OR MAYBE NOT

“Appropriation artists” take pre-existing objects or images and use them in a new work of art making very few, if any, changes in the original. The “art” comes in recontextualizing the original. 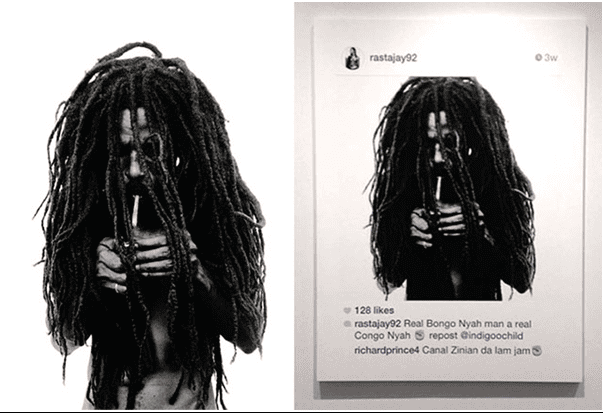 Not surprisingly, being sued for copyright infringement is an occupational hazard for appropriation artists, who argue that their use of copyrighted works is permitted as “fair use.”

As we previously described in our post on the fair use of digital excerpts, courts typically use a four-factor test in deciding whether or not a use qualifies as “fair:”

Someone posted a picture of a Rastafarian that was taken by Graham on Instagram. Prince took a screen shot of the Instagram post, printed it on a six-foot tall canvas, and included it with other similar Instagram images as part of his “New Portraits” collection.

Some of the pieces included in Prince’s collection have sold for up to $100,000. You can see the two images in dispute in this case above.

Prince has been in court for copyright infringement before. In Cariou v. Prince there were 30 images (also of Rastafarians) in dispute. The court found that 25 of them were fair use, but five were questionable. Cariou and Prince settled out of court, so whatever legal issues there were around those five were not resolved by the courts.

This case is very different than Cariou. Prince manipulated the images in Cariou in a variety of ways — including putting them in collages, adding content (some of it in color), blurring, sharpening, etc. The court found that what Prince did was “transformative,” and it qualified as fair use under the “purpose and character of use” guideline.

In this case, Prince used the image unchanged. Any cropping was done by the person who originally posted it to Instagram. The only thing that has changed is the Instagram frame around it, including a comment that was posted by Prince.

Prince’s attorneys will likely argue that the recontextualization provided by the Instagram frame qualifies as “transformative.”

Another difference between this case and Cariou is that Cariou had not actively marketed his images or sold them for any significant amounts of money. Richard Graham, on the other hand, sells his photographs ONLY as prints and has never licensed them, so it’s quite possible that Prince’s use has harmed the market for Graham’s prints.