Royalties on Revoked or Expired Patents

Patent is revoked —
Can you get a royalty?
Maybe, maybe not 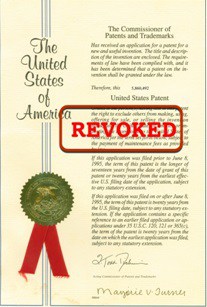 Can you collect royalties under a patent licensing agreement beyond the expiration date, or after the patent has been revoked?

The short answer is, it depends on the specific circumstances and the way the licensing agreement was drafted.

In 1992 Genentech licensed some DNA sequences,known as “enhancers,” from Hoechst. The enhancers help speed drug production and were protected by one European and two US patents.

In 1999, the European patent was revoked, although the US patents continued to be presumed valid.

Hoechst filed a lawsuit in the US claiming that Genentech was infringing its US patents after the termination of the license. The US court found that the patents were valid, but that Genentech did not infringe the US patents.

Hoecsht began international arbitration proceedings seeking royalties from Genentech on the cancer drugRituxan for the period 1998 to 2008 (when the license was terminated). The arbitrator found that Genentech was responsible for paying the royalty, even though the European patent had been revoked (and such revocation is considered effective retroactively) and the US patents had been found to be not infringed.

Genentech has appealed the ruling. A final decision has not been issued as of this writing, but the Advocate General has issued an opinion siding with the arbitrator, saying that a license can require royalty payments for reasons not connected to a patent.

US law is somewhat different. In general, US law does not allow for payments for a revoked or expired patent. In Kimble v. Marvel, the US Supreme Court upheld a principle that it is contrary to law to require royalties on an expired (or revoked) patent.

When crafting license agreements, if it’s anticipated that royalties may last beyond the life of the patent this can be accommodated by having two different royalty rates. There could be a lower royalty rate that continues regardless of the status of the patent based on other know-how or benefits that the licensee has received.