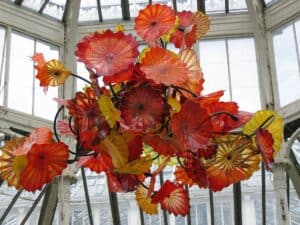 The world-renowned artist Dale Chihuly has been sued by an assistant who claims he helped create some of Chihuly’s artworks.

As reported by the New York Times, Chihuly “used a group of unpaid assistants for 15 years to create works that were attributed solely to him,” according to Michael Moi.

Mow said that he did construction work for the artist and eventually participated in “myriad clandestine painting sessions.”

According to the complaint, Chihuly has

long relied on a collection of discreet and trusted individuals to work in the shadows to create the drawings and paintings on paper glass plexiglass and canvas that bear his name.

In his counterclaim, Chihuly acknowledged that he used assistants but denied that Moi was one of them. He described Moi as a “handyman.”

Moi claimed that he initially worked with Chihuly to create artworks, and that later Moi created works on his own that Chihuly merely signed.

Chihuly’s lawyers said that Moi had threatened to expose “embarrassing information” about Chihuly unless he was paid.

According to his lawyers, Chihuly, 75, suffers from “bipolar disorder, symptoms of which include depression, hyperactivity and/or mania, paranoia, impaired judgment and irrational behavior.”

Chihuly is especially known for his large-scale glass sculptures, one of which is shown above.  According to another article in the Times,

Chihuly Studios now makes some 30 site-specific commissions a year, ranging in price from $200,000 to millions of dollars. The website sells handmade editions of pieces for between $5,000 and $8,500 each.

Moi apparently had no written agreement with Chihuly.  And therein could lie the problem.

A well-drafted independent contractor agreement will usually assign ownership of any intellectual property created by the contractor (including copyrights in “works of authorship,” such as artworks) to the client — thus (hopefully) preventing disputes like this one.