their patent law reforms will 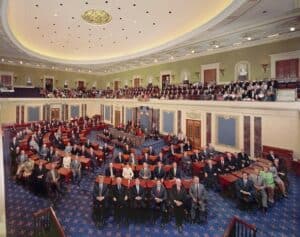 By Transferred from en.wikipedia to Commons. Transfer was stated to be made by User:pmax7., Public Domain, https://commons.wikimedia.org/w/index.php?curid=3350777

The stated purpose of the bill is to

strengthen the position of the United States as the world’s leading innovator by amending title 35, United States Code, to protect the property rights of the inventors that grow the country’s economy.

The Bill is intended to address the perceived shortcomings of patent law reforms that occurred in 2011 with the America Invents Act (AIA).  Specifically, according to the Bill’s findings,

unintended consequences of the comprehensive 2011 reform of patent laws are continuing to become evident, including the strategic filing of post-grant review proceedings to depress stock prices and extort settlements, the filing of repetitive petitions for inter partes and post-grant reviews that have the effect of harassing patent owners, and the unnecessary duplication of work by the district courts of the United States and the Patent Trial and Appeal Board…

Among other proposed changes, the Bill’s authors say that it:

efforts by Congress to reform the patent system without careful scrutiny create a serious risk of making it more costly and difficult for legitimate innovators to protect their patents from infringement, thereby weakening United States companies and the United States economy.