get trademark for yoga mat 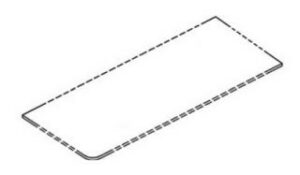 The Trademark Trial and Appeals Board (TTAB) has affirmed a refusal to register the shape of a Lululemon yoga mat as a trademark.

The requested mark, shown above, is for “a three-dimensional configuration of a rectangular-shaped yoga mat having one corner being curved and the remaining three corners being right angles.”

Color is not a feature of the mark.

Lululemon, which makes fashionable and often expensive yoga and running attire and gear, sought to register the mark in Class 28 for yoga mats.

The mats that use the design sell for up to $88.

The Trademark Examining Attorney refused registration of the mark, on the grounds that it was a non-distinctive product design and that the company hadn’t provided sufficient proof if “acquired distinctiveness.”

The TTAB noted that:

Configurations of products, such as we have at issue in this appeal, are not inherently distinctive and may only be registered as marks upon a showing of acquired distinctiveness. … “Distinctiveness is acquired by ‘substantially exclusive and continuous use’ of the mark in commerce.”

An applicant for such a mark must be able to show that the “primary significance of the product configuration in the minds of consumers is not the product but the source of that product” — in other words, that this is not just ANY yoga mat but specifically a Lululemon yoga mat.

As the TTAB found,

Acquired distinctiveness may be shown by direct or circumstantial evidence. Direct evidence includes actual testimony, declarations or surveys of consumers as to their state of mind. Circumstantial evidence is evidence from which consumer association might be inferred, such as years of use, extensive amount of sales and advertising, and any similar evidence showing wide exposure of the mark to consumers.

Lululemon presented evidence that its mat design had been used for more than five years and that it had been widely promoted.  More than 1.34 million of the mats had been sold.

However, found the TTAB,

None of Applicant’s customers or potential customers refer to the shape of the yoga mat in the comments included in Applicant’s website.

The TTAB noted that competing yoga mats also had curved corners (although not necessarily only ONE curved corner) and found that:

The TTAB found that there was nothing in the record to show that consumers viewed the curved corner design as an indicator that Lululemon was the source of the mats.

The decision is In re Lululemon Athletica Canada Inc.