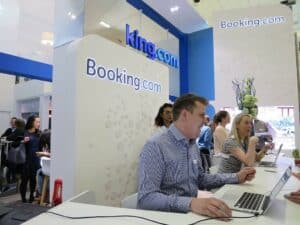 The Federal Circuit has ruled that a domain name including a “generic” term can be eligible for trademark protection.

One of the applications was for the simple word mark “Booking.com.”

The US Patent and Trademark Office (USPTO) denied the company’s four applications, finding that the proposed mark was generic or was merely descriptive of the company’s services.

The company appealed, and the Trademark Trial and Appeal Board (TTAB) affirmed the refusals. The company then filed suit against the director of the USPTO and the case made its way to the Federal Circuit

Among other evidence, the company submitted what’s known as a “Teflon survey.”  This is the most widely-used survey format for measuring consumer opinion when a company claims that its name isn’t generic.

The federal Lanham Act, which governs trademarks, identifies four categories of marks. As the court noted,

Arrayed in an ascending order which roughly reflects their eligibility [for] trademark status and the degree of protection accorded, these classes are (1) generic, (2) descriptive, (3) suggestive, and (4) arbitrary or fanciful.

A generic mark refers to the genus or class of which a product or service is a member and can never be protected.

A descriptive mark “describes a function, use, characteristic, size, or intended purpose” of the product or service, such as 5 Minute glue and the Yellow Pages telephone directory.

Suggestive marks include Coppertone for sunscreen and Orange Crush for orange-flavored soda.

Examples of arbitrary marks include “Apple” for computers.

Fanciful marks are made-up words such as “Clorox” for bleach and “Kodak” for cameras.

The court reviewed several cases involving proposed “dot com” trademarks that were rejected by the courts.  However, the court allowed the trademark registration in this case, because:

when combined with an SLD, a TLD generally has source identifying significance and the combination of a generic SLD and a TLD is generally a descriptive mark that is protectable upon a showing of acquired distinctiveness.

A “TLD” is a top-level domain such as .com or .net, and a “SLD” is a second-level domain — the word or phrase to the left of the dot — for example, the “Aeonlaw” in “Aeonlaw.com.”

This doesn’t mean that ALL domain names may be trademarked. The applicant may still need to establish distinctiveness.

In this case, Booking.com was able to show, among other things, that it had 100,000 Twitter followers and more than five million Facebook “likes” and that the Teflon survey showed that 74.8 of respondents identified Booking.com as a brand name.

The case is Booking.com v. Matal.