is cool with patenting pot; 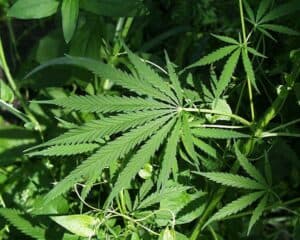 By United States Fish and Wildlife Service – [1], specifically CASA1_LF.jpg. (If the links expire, the photo can be found by searching for “cannabis” at the GIMP photo archive.)The original file with a watermark is at http://www.fws.gov/midwest/sherburne/CASA1.htm, Public Domain, https://commons.wikimedia.org/w/index.php?curid=21916

A “plant patent” is granted to an inventor who has invented and reproduced a distinct or new variety of plant. Algae and macro-fungi are considered to be plants, but bacteria are not.

Whoever invents or discovers and asexually reproduces any distinct and new variety of plant, including cultivated sports, mutants, hybrids, and newly found seedlings, other than a tuber propagated plant or a plant found in an uncultivated state, may obtain a patent therefor, subject to the conditions and requirements of this title.

“Asexual reproduction” means the propagation of a plant without the use of fertilized seeds to assure an exact genetic copy of the plant being reproduced.

For example, acceptable means of asexual reproduction include:

Like with other types of patents, a plant patent lasts for 20 years from the date of filing.

Twenty-nine states and the District of Columbia have legalized the sale of medical marijuana. Eight states allow the sale of marijuana for recreational use. In some states, marijuana is being legally cultivated on an industrial scale, with many new varieties being introduced.

Among the host of uncertainties they face, cannabis industry entrepreneurs might wonder if they can patent marijuana products — after all, they are still illegal at the federal level. It may come as a relief then, to find out that the US Patent Office has been issuing cannabis-related patents since 1942. Nearly 1,500 cannabis patent applications have been filed, more than half in the last 25 years. About half of the requests were approved and some of those have expired, leaving about 500 currently active cannabis-related patents.

Cannabis-related patents include drug formulations, methods of preparation, and methods of treating diseases and ailments with Cannabinoids.

Relatively few plant patents have been issued for marijuana. According to Forbes, there are only five marijuana-related US plant patent cases (four pending and one issued).

Even though marijuana (and its cultivation) remains illegal in many places, that doesn’t prevent the USPTO from granted marijuana-related patents.

Only two types of inventions are specifically NOT patentable:  those involving human organisms (all other types of animals are OK) and those that are used only in atomic weapons.