the trademark for “Comic-Con”; 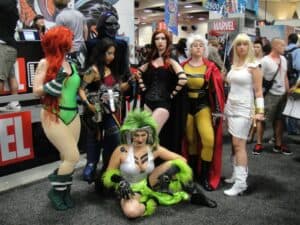 A jury in San Diego decided in favor of Comic-Con International (CCI), the nonprofit organization that runs the San Diego Comic-Con (SDCC), in a trademark dispute with Dan Farr Productions and Bryan Brandenburg, the organizers of the Salt Lake City Comic Con (SLCC).

CCI has been running the San Diego Comic-Con for almost 50 years. The annual convention attracts more than 140,000 people (many in costume) over its four-day run. Many celebrities attend panels and autograph signings, and many movie studios use the event to premiere trailers and promote their films.

The trademark dispute dates back to 2014, when the promoters of the Salt Lake City convention engaged in promotional activities, including driving an SLCC-branded vehicle through the streets of San Diego during the SDCC.

CCI sent a cease-and-desist letter to Dan Farr Productions, alleging that the company was deliberately trying to confuse consumers about the sponsorship of the two events.

Farr and Brandenburg argued that the term “comic con” was a generic reference to a convention focusing on comic books. They contended that CCI’s trademark only applied to the specific term “Comic-Con” with a hyphen. CCI had filed but withdrawn an application for a trademark for “Comic Con” without a hyphen.

Farr and Brandenburg cited numerous instances where “comic con” was used to describe events before the first SDCC and said that only 1% of consumers were confused about whether the San Diego and Salt Lake City events were related.

At trial, CCI produced evidence that “Comic-Con” was widely recognized to refer only to the San Diego Convention. 70% of respondents to the survey made this association.

Farr and Brandenburg boasted in emails of “hijacking” the fame of SDCC to promote their own event.

However, the jury awarded damages of only $20,000, instead of the $12 million that CCI had sought.

The damages sought included $9 million for an advertising campaign to clear up consumer confusion between the events.

The jury found that although the defendants used the Comic-Con mark without permission, they didn’t infringe “willfully.”

Some other comics-oriented conventions have taken a license to use the Comic-Con mark but others have not. In the wake of the decision, the non-licensed Comic Con’s (and Comic-Con’s) may need to acquire licenses or change their names to avoid trademark infringement claims.

The defendants announced that they planned to appeal.