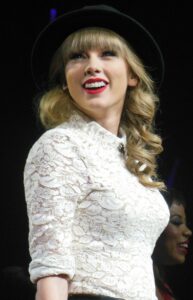 A federal judge in Los Angeles has ruled that lyrics by Taylor Swift (and others) lack the modicum of creativity required for copyright protection.

The plaintiffs alleged that the lyrics to Swift’s song Shake It Off infringed the copyright for the lyrics for their own song, Playas Gon’ Play, recorded by the group 3LW.

According to the complaint,

‘Playas Gon’ Play’ includes the lyrical phrase “Playas, they gonna play / And haters, they gonna hate.” The combination of playas/players playing along with hatas/haters hating may seem like common parlance today, however, in 2001 it was completely original and unique. Indeed, the combination had not been used in popular culture prior to Plaintiffs’ original use.

That phrase made up about 20% of the song.

Swift and her company brought a motion to dismiss, arguing that that copyright didn’t protect such short phrases.

The defendants also argued that the concepts of “players playing and haters hating” wasn’t protectable under intellectual property law.

The court took judicial notice of the 1977 Fleetwood Mac song Dreams, which includes the line “Players only love you when they’re playing.”

The judge noted that only a very minimal level of originality and creativity is needed in order for a work of authorship to qualify for copyright protection, but that the phrases cited by the plaintiffs failed to meet even this low threshold.

The opinion is here.