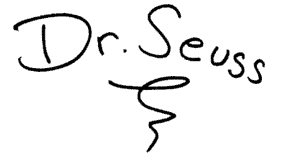 A federal court in California has ruled that the title of a book called Oh, the Places You’ll Boldly Go! didn’t violate the trademark of Dr. Seuss Enterprises.

Theodor Seuss Geisel, who wrote under the name “Dr. Seuss,” was the author of more than 60 children’s books, including Oh, the Places You’ll Go!

The authors of the Boldly version launched a Kickstarter campaign to finance the printing and distribution of their book, which combines Seuss-style language with Star Trek characters and other elements.

The court found that Boldly was a parody and thus allowed as fair use.

In the 1989 Rogers v. Grimaldi case, which involved a suit by actress/dancer Ginger Rogers over the Federico Fellini film Ginger and Fred, the Ninth Circuit ruled that the title of an expressive work (such as a book) may be used with another work under the Lanham Act (which governs trademarks)

According to the court in the Seuss case, this test

The Boldly book was clearly labeled as a parody, stating:

This is a work of parody, and is not associated with or endorsed by CBS Studios or Dr. Seuss Enterprises, L.P. … Copyright Disclaimer under section 107 of the Copyright Act 1976, allowance is made for `fair use’ for purposes such as criticism, comment, news reporting, teaching, scholarship, education, research, and parody.