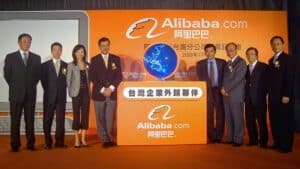 Alibaba, the Chinese company, submitted 43 blockchain-related patent applications in 2017, making it second in China only to the People’s Bank of China, with 68.

Overall, as we discussed in this blog, 406 blockchain-related patent applications were filed in 2017. More than half of the applications came from China, and the US was number two.

Alibaba Group Holding Limited is a multinational e-commerce, retail, internet, and technology company founded in 1999. It had a market cap of $542 billion as of June, 2018.

Alibaba, via its Lynx International shipping and logistics subsidiary, uses blockchain technology to track information about production, transportation, customs, and inspection of goods.

The company appears to have no interest in the most common application of blockchain technology — cryptocurrencies like bitcoin.

Alibaba’s founder, Jack Ma, said he was “totally confused” by cryptocurrencies and knew little about them.

Alibaba announced in January that “Alibaba Cloud has never issued a Bitcoin-like virtual currency, and it will not host any [cryptocurrency] mining platforms.”

An unrelated company, ABBC Foundation, announced an initial coin offering (ICO) for a virtual currency to be called “Alibabacoin.” ABBC raised more than $3.5 million in the ICO.

However, in May a US court denied Alibaba’s request for an injunction against Dubai-based ABBC, on jurisdictional grounds.

ABBC claims that its coin’s name is based on the character of “Ali Baba” from the Middle Eastern folk tale “One Thousand and One Nights,” rather than on the Chinese company’s name.