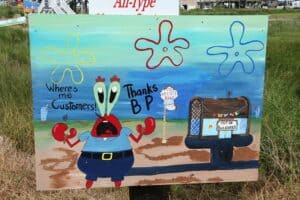 Federal court finds
fictional elements can
be under trademark

A federal court of appeals recently recognized that elements of fictional works can be eligible for trademark protection.

SpongeBob himself works as a fry cook at the restaurant.

The defendant had taken steps to open real-world seafood restaurants using the name.

As the court noted, “The Krusty Krab” mark has been licensed by Viacom to third parties for a variety of products, including playsets, a video game, and aquarium accessories.

Although the name has never been licensed to a restaurant, Viacom’s Paramount subsidiary did license the “Bubba Gump Shrimp Co.” mark (from the movie “Forrest Gump”) for a restaurant chain.

When the owner of IJR did a search for “The Krusty Krab” name, he didn’t find another restaurant using the name. IJR then filed a trademark application for THE KRUSTY KRAB.

Viacom hadn’t previously registered the name as a trademark.

The USPTO issued a notice of allowance for IJR’s mark, allowing it to be issued once IJR filed a statement of use.

IJR countered that Viacom didn’t actually own the mark and claimed there was no likelihood that potential customers would think the restaurant was connected to Viacom.

Viacom countered with a consumer survey showing that 30% of respondents thought The Krusty Krab restaurant was connected with Viacom.

The court found that Viacom had established ownership of the mark through sales and licensing, and that Viacom had demonstrated that The Krusty Krab had acquired distinctiveness and that every “likelihood of confusion” factor indicated that IJR’s proposed use would probably cause consumer confusion.

IJR appealed, and the 5th Circuit upheld the decision:

Can specific elements from within a television show — as opposed to the title of the show itself — receive trademark protection? We conclude that they can.