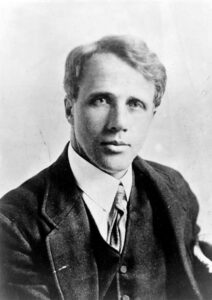 Robert Frost. By Unknown at the source. – Immediate source: http://www.americaslibrary.gov/jb/modern/jb_modern_frost_2_e.html. From the Library of Congress., Public Domain, https://commons.wikimedia.org/w/index.php?curid=486885

Due to a quirk of US copyright law, an abundance of works published in 1923 finally entered the public domain as of January 1, 2019. Some people are even celebrating “Public Domain Day.”

The law was known as the Sonny Bono Copyright Term Extension Act, named for the performer-turned-California-Congressman who had been a sponsor of a similar bill and who died nine months before the act became law.

Disney (which owns the character of Mickey Mouse, among other valuable intellectual properties), lobbied for copyright extension for years.

The 1998 change in the law led to a 20-year “dry spell” for new works entering the public domain.

Mickey first appeared in the Disney cartoon Steamboat Willie in 1928. The character will now enter the public domain in 2024.

However, Disney still owns copyrights for later versions of the character, as well as Mickey-related trademarks.

The most obvious example here is Mickey’s white gloves. He didn’t wear them in Steamboat Willie. So if you wanted to sell a Mickey toy with white gloves, you’d probably need to wait until 2025, when the copyright for the first Mickey short with white gloves, The Opry House, is scheduled to expire.

Previously unpublished works (such as diaries and letters) whose authors died in 1948 and earlier are also now in the public domain.

Works first published in 1923 and now in the public domain include: