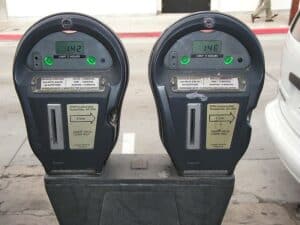 The founder of IPS (King) and its Chief Technical Officer (Schwarz) are both electronic engineers. King said he came up for the idea of a credit-card-enabled solar-powered parking meter in 2003. He consulted with Schwarz on the design and also hired an outside design firm.

One of the patents issued in 2013 based on a 2006 application that named King and Schwarz as joint inventors.

The later patent issued in 2010 from a 2008 application and named King and the outside design firm as inventors.

the invention was described in . . . a patent granted on an application for patent by another filed in the United States before the invention by the applicant for patent.

Duncan argued that the earlier patent was prior art because Schwarz had conceived at least part of the relevant disclosure.

The Patent Trial and Appeals Board found that King was the sole inventor of the anticipating disclosure of the earlier patent.

The statute’s reference to ‘by another’ means that an application issued to the same inventive entity cannot qualify as § 102(e) prior art.

If Schwarz was a joint inventor of the anticipating disclosure, then the patent was “by another.”

To be a joint inventor, one must:

(1) contribute in some significant manner to the conception or reduction to practice of the invention,

(2) make a contribution to the claimed invention that is not insignificant in quality, when that contribution is measured against the dimension of the full invention, and

(3) do more than merely explain to the real inventor’s well-known concepts and/or the current state of the art.

(1) determine what portions of the reference patent were relied on as prior art to anticipate the claim limitations at issue,

(2) evaluate the degree to which those portions were conceived “by another,” and

(3) decide whether that other person’s contribution is significant enough, when measured against the full anticipating disclosure, to render him a joint inventor of the applied portions of the reference patent.