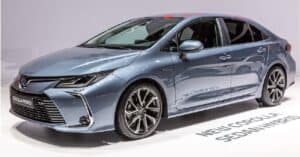 As The Verge reported, earlier this year Toyota announced that it would allow other companies to license almost 24,000 patents related to its hybrid car technology.

The licenses will be royalty-free until 2030.

As The Verge notes,

Toyota is the most prolific maker and seller of hybrid vehicles in the world, with about 80 percent of the market, according to Reuters. The automaker’s also been at it for a really long time — its first hybrid, the Prius, debuted in Japan in 1997 and started its worldwide spread in 2000. Since then, Toyota has sold more than 13 million hybrid vehicles, and currently offers hybrid versions of seven different models (including three types of Prius).

Toyota previously made 6,000 patents related to its hydrogen fuel cell technology available on a royalty-free basis.

Tesla announced back in 2014 that it wouldn’t sue anyone for infringement if they were using its electric vehicle technology “in good faith.”

Tesla Motors was created to accelerate the advent of sustainable transport. If we clear a path to the creation of compelling electric vehicles, but then lay intellectual property landmines behind us to inhibit others, we are acting in a manner contrary to that goal.

Why would companies go to the trouble and expense of obtaining patents, only to let others freely use their patent rights?

One reason is to prevent others from being less generous.

Many people don’t realize that a patent doesn’t grant a right to DO anything. But it does grant the right to exclude others from exercising the rights of the patent holder.

A patent owner has the right to decide who may – or may not – use the patented invention for the period in which the invention is protected. In other words, patent protection means that the invention cannot be commercially made, used, distributed, imported, or sold by others without the patent owner’s consent. (Emphasis added.)

Thus, patent-holders like Toyota and Tesla may allow others into a market, but they prevent others from keeping them OUT of the market for the duration of the patents.

A royalty-free patent license may sound like a good idea, but as with any “free lunch” offer, it’s a good idea to look at the fine print.

“Open-source”-style patent licensing can pave the way to widespread adoption of new technologies, and help build infrastructure that “lifts all boats” in a market, but it’s still wise to use due diligence when considering any patent license.