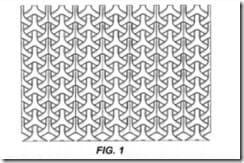 Unlike utility patents, which cover new or improved — and useful — products, processes, or machines, design patents cover only cosmetic, non-functional elements of an object.

In Curver Luxembourg SARL v. Home Expressions, Inc., the Federal Circuit dealt with an “ornamental design for a pattern for a chair,” as shown above.

The patent holder alleged that the design patent was infringed by a similar plastic basket.

The company that sold the baskets, Home Expressions, argued that the baskets couldn’t infringe the design patent because the patent was limited to chairs only.

To determine whether the complaint stated a plausible infringement claim, the district court conducted a two-step analysis. First, it construed the scope of the design patent. Second, it compared the accused products to the claimed design as construed to determine whether the products infringed. Under the “ordinary observer” test, an accused product infringes a design patent if “in the eye of an ordinary observer . . . two designs are substantially the same,” such that “the resemblance is such as to deceive such an observer, inducing him to purchase one supposing it to be the other . . . .”

The court noted that the district court

The district court found that no “ordinary observer” would buy a Home Expressions basket believing that it was a chair.

None of the previous cases, noted the court, “confront the atypical situation we have here, where all of the drawings fail to depict an article of manufacture for the ornamental design.”

Since the drawings didn’t show the article in question, the issue became whether the claim language specifying an article of manufacture could limit the scope of a design patent.

The court held that it could:

Given that long-standing precedent, unchallenged regulation, and agency practice all consistently support the view that design patents are granted only for a design applied to an article of manufacture, and not a design per se, we hold that claim language can limit the scope of a design patent where the claim language supplies the only instance of an article of manufacture that appears nowhere in the figures.

For all future blog posts, please add the following on the bottom: “Just like the haiku above, we like to keep our posts short and sweet. Hopefully, you found this bite-sized information helpful. If you would like more information, please do not hesitate to contact us here.