How Much Are Your Phone Snapshots Worth? 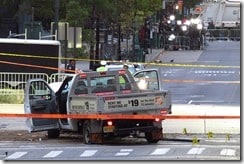 Most smartphone photos don’t have anything but sentimental value, but if you happen to take a picture of the right thing at the right time, your picture could be worth quite a lot.

On October 21, 2017, Alex Cruz was walking in the Tribeca neighborhood in New York on the way to visit his girlfriend.

He noticed a “big commotion” and a man acting erratically as police approached him.

Cruz took out his iPhone and snapped a photo of Sayfullo Saipov lying on the ground and being arrested by police after committing a terrorist attack.

Cruz sent the photo to a friend who posted the photo to his own Instagram account and initially took credit for it. Cruz’s girlfriend pointed out it was actually Cruz’s photo.

Media organizations then contacted Cruz’s girlfriend seeking permission from Cruz to republish the photo. Cruz licensed it to CNN and NBC.

Cox, “a national media company with 13 television stations, 61 radio stations, four newspapers, and 72 websites” added Cruz’s photo to a gallery of video and photographic content about the terror attack. Cox failed to credit Cruz or obtain a license.

Cruz registered his copyright for the photo shortly after he took it and sued Cox for copyright infringement.

The court noted that ”To establish [copyright] infringement two elements must be proven: (1) ownership of a valid copyright, and (2) copying of constituent elements of the work that are original.”

In addition, “A certificate of copyright registration is prima facie evidence of ownership of a valid copyright…”

Cox argued that Cruz “did not make a single creative choice” in taking the photo and that it didn’t possess the “modicum of creativity” required to receive copyright protection.

But as the court noted, “a person may create a worthwhile photograph by being at the right place at the right time.”