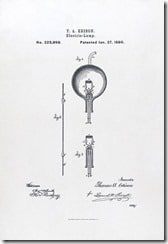 The US Supreme Court’s 2014 Alice Corp. v. CLS Bank decision has been confusing patent attorneys, the patent office, and the courts for the past six years.

The Alice decision (and subsequent cases and guidelines based on it) wrestle with making a distinction between patentable “inventions” and a non-patentable “abstract ideas.”

Both the Supreme Court and the Federal Circuit have failed to define exactly what an “abstract idea” is.

As the authors of the paper cited below note,

Courts have struggled to apply the two-part Alice framework, coming to decisions that are arguably inconsistent and causing many judges and lawyers to throw up their hands and say that the ensuing case law is impossible to understand or apply. The twelve-judge Federal Circuit split 7-5 in a recent patentable subject matter case that produced eight different opinions.

That distinction between “inventions” and mere “ideas” is central to the patentability of intangible things like software and business methods.

The confusion hasn’t prevented an increasing number of software-based patents from being issued. In 2019, a whopping 62% of issued US utility patents were “software-related” – an increase of 22% from 2018.

In theory, both giant corporations and individual inventors should be treated the same way by the USPTO and the courts. However, a recent study shows that isn’t the case.

Although Alice has often been cited as a weapon against so called “patent trolls” (also called “non-practicing entities” or “NPEs”) the authors of the paper noted:

The authors found that

13.8% of individual inventor decisions found the patents eligible outright, less than half the rate for both other NPEs and practicing entities.

The authors note that it’s not clear why individual inventors fare worse than big companies in Alice cases. One possible explanation:

Individual inventors may hire worse lawyers to enforce patents as well as to write them, and may lose because those lawyers are not as good at navigating the shifting and inconsistent patentable subject matter precedent.