Once found to be scandalous,

Now approved for use 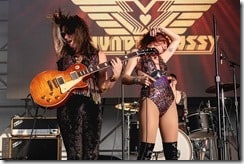 A Seattle-based all-woman hard-rock band has finally succeeded in obtaining a federal trademark it applied for in 2015.

As the Seattle Times reported, the US Patent and Trademark Office (USPTO) rejected the application, contending that the proposed “Thunderpussy” mark violated the Lanham Act.

Section 2(a) of the Lanham Act prohibits the registration of trademarks that “[c]onsist[] of or comprise[] immoral[] or scandalous matter.”

disparage or falsely suggest a connection with persons, living or dead, institutions, beliefs, or national symbols, or bring them into contempt, or disrepute…

To determine whether a mark is immoral or scandalous, the USPTO will consider whether a substantial number of people would find the mark “shocking to the sense of truth, decency, or propriety” or “giving offense to the conscience or moral feelings.”

For example, as we discussed in this blog, after four years and two appeals to the Court of Appeals for the Federal Circuit (CAFC), Simon Tam was awarded a trademark for The Slants, the name of his “Chinatown Dance Rock” band.

The Patent Office examiner found that the proposed mark was disparaging to people of Asian descent, even though Tam said he was trying to “reclaim” the term, to show pride in the members’ Asian heritage.

The Federal Circuit eventually held that “the disparagement provision of § 2(a) is unconstitutional because it violates the First Amendment.”
Similarly, as we discussed in this blog, the US Supreme Court found that the Lanham Act’s ban on “immoral or scandalous” trademarks like “FUCT” was unconstitutional.

In the wake of the Supreme Court’s decision, Thunderpussy’s lawyer appealed the USPTO’s rejection of the mark and it was finally granted in early April.