Many sounds can be trademarked,

And owners can sue. 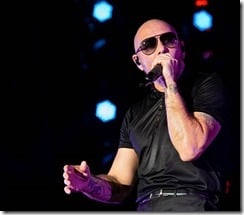 Rap artist Pitbull has received two federal trademark registrations for the sound of a yell used in his music.

A compilation of Pitbull’s yells can be heard here.

An article in the NYU Journal of Intellectual Property and Entertainment Law, co-authored by Pitbull himself (the professional name of Armando Christian Perez) and his lawyers, explains how the artist developed his signature “grito,” or yell, that has come to identify his work.

As the NYU article states:

Immediate recognition is the epitome of success for musical artists. Few artists attain the level of success at which fans easily identify their sound from a mere snippet of a track, joining the ranks of artists like Frank Sinatra, Dolly Parton, The Grateful Dead, Bob Dylan, and Ella Fitzgerald. Their unique sounds are almost immediately recognizable and easily distinguished from other artists in their genres. In the modern rap and pop world, Pitbull has attained this level of notoriety. Audiences easily recognize his raspy voice and his approach to rap, but it is his grito (yell), “EEEEEEEYOOOOOO!” that clinches it.

As Billboard notes, out of more than 2.6 million active US trademarks, there are only about 250 active “sensory” trademarks. Of these, 234 are for sound marks, and of those 36 are for “familiar sounds” – sounds without words associated with specific goods and services.

For example, trademarked sounds include:

Harley-Davidson tried to get a trademark for the sound of its motorcycle engines, but eventually gave up.

Now that Pitbull owns the sound mark, anyone who used the same yell, or something confusingly similar, could be found liable for trademark infringement.