Not protected as IP, 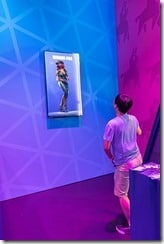 Plaintiffs Jaylen Brantley and Jared Nickens said that in 2016 they had created, named, and popularized the dance and incorporated it into breaks at the University of Maryland basketball games. The dance subsequently went viral on social media, reaching more than 100 million views.

It later appeared that the plaintiffs had actually copied the dance from two New Jersey high school students they saw on Instagram.

The plaintiffs sued Epic Games for incorporating the dance into the online video game Fortnite.

The dance move was used in the form of an “emote” that could be purchased for about $5 and used with a player’s character within the game.

The plaintiffs brought causes of action for invasion of the right of privacy/publicity, unfair competition, unjust enrichment, trademark infringement, trademark dilution, and false designation of origin.

The court found that the plaintiffs’ state law claims for invasion of privacy/publicity, unfair competition, and unjust enrichment were preempted by the Copyright Act.

…all legal or equitable rights that are equivalent to any of the exclusive rights within the general scope of copyright as specified by section 106 in works of authorship that are fixed in a tangible medium of expression and come within the subject matter of copyright as specified by sections 102 and 103, whether created before or after that date and whether published or unpublished, are governed exclusively by this title. Thereafter, no person is entitled to any such right or equivalent right in any such work under the common law or statutes of any State.

Choreographic works can be protected by copyright law (17 U.S.C. § 102(a)). To try to avoid preemption, the plaintiffs contended that the Running Man was a “dance,” and not a “choreographic work,” and therefore not the subject of copyright.

The Copyright Office states that choreographic works typically contain one or more of the following elements: rhythmic movements in a defined space, compositional arrangement, music or textual accompaniment, dramatic content, presentation before an audience, and execution by skilled performers.

Choreographic works are distinguished from de minimis movements, dance steps, social dances, and simple routines, which are not copyrightable. …

The court decided that “the Running Man is somewhere on the continuum between copyrightable choreography and uncopyrightable dance.”

However, the court concluded it didn’t actually have to decide where on the continuum the Running Man fell:

Given that the scope of copyright preemption is broader than that of copyright protection, it is sufficient here to find that the Running Man is within the “general subject matter” of copyright under a choreographic work.

The court also concluded that the Running Man dance didn’t qualify as a trademark.