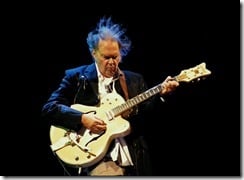 Back in 2015, we discussed how Young objected to Trump’s use of Young’s “Rockin’ in the Free World” to launch his presidential campaign.

With regard to the 2016 election, Young (a Canadian) noted that:

[Donald Trump] does not have my permission to use the song “Rockin’ in the Free World” at his appearances. Legally, he has the right to, however it goes against my wishes.
I made this perfectly clear after he played it in a media moment to announce his candidacy. I ask him then, in a widely shared, public letter to cease and desist.
However, he chose not to listen to my request, just as he chooses not to listen to the many American voices who ask him to stop his constant lies, to stop his petty, nasty name-calling and bullying, to stop pushing his dangerous, vilifying and hateful rhetoric.

It’s not uncommon for musicians to object when their tunes are co-opted for political purposes.

Rolling Stone prepared a playlist of songs by 34 artists who fought (or at least objected to) politicians’ use of their music.

This time around, Young is doing more than just making a statement. He’s suing the Trump campaign for copyright infringement, for Trump’s use of both “Rockin’” and Young’s song “Devil’s Sidewalk” at a rally in Tulsa, Oklahoma in June.

As the New York Times reports, Young says the campaign played the songs without a license and has asked for an injunction against future use, as well as statutory damages.

According to Young’s complaint,

in good conscience [Young] cannot allow his music to be used as a ‘theme song’ for a divisive, un-American campaign of ignorance and hate.

So what’s changed since the last election?

As the Times notes,

artists have often had little power to block the political use of their songs. Most campaigns have the same kind of legal cover to play songs that radio stations or concert halls do — through blanket licensing deals from entities like ASCAP and BMI, which clear the public performance rights for millions of songs in exchange for a fee. ASCAP and BMI even offer special licenses to political campaigns, letting them use songs wherever they go.

Trump has also used the Rolling Stones anthem “You Can’t Always Get What You Want” as the closing theme at many rallies. The Stones announced in June that they would sue if it happened again, saying that they’d sent the campaign a number of cease-and-desist letters.

The Stones song was also played at the Tulsa rally – possibly for the last time, given that the pandemic has mostly halted large in-person campaign events.

BMI, which licenses the Stones song, noted that

The Trump campaign has a Political Entities License which authorizes the public performance of more than 15 million musical works in BMI’s repertoire wherever campaign events occur.
There is a provision, however, that allows BMI to exclude musical works from the license if a songwriter or publisher objects to its use by a campaign. BMI has received such an objection and sent a letter notifying the Trump campaign that the Rolling Stones’ works have been removed from the campaign license, and advising the campaign that any future use of these musical compositions will be in breach of its license agreement with BMI.

Similarly, the Young songs were removed from ASCAP’s political license to Trump.

However, it’s not clear that withdrawing songs from the blanket licenses is permitted under decades-old consent decrees between the licensing organizations and the US government.
The issue seems unlikely to be resolved by the courts before the November election.