No Trade Secret Protection for Info Disclosed on Zoom Call

If you discuss via Zoom, 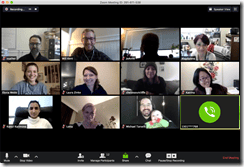 Although it’s far from the only video communications platform, Zoom has become increasingly popular during the pandemic.

In August, the company reported that its revenue for May-June had quadrupled since the same period last year, to $663.5 million.

As the AP noted,

The sudden demand seemed to catch Zoom off guard initially, leaving its service vulnerable to hackers and mischief-makers who exploited security weaknesses to barge into or snoop on meetings. Zoom says it believes it has closed most of the loopholes and eventually won back some school districts that temporarily abandoned the service because of security concerns.

Also, many companies have failed to use good security practices when using Zoom and similar communications platforms.

This failure may have cost one company its trade secret claim.

The defendant, Todd Perri, was initially interested in a Smash franchise. He had an engineering degree and later came to feel that he could create his own mobile trash-compacting business without working with Smash.

When Perri expressed interest in a franchise, he was invited to participate in Zoom calls with Smash and with other franchisees to learn more. He was also required to sign an NDA.

Zoom has features that a host can use to control who participates in a meeting, such as requiring a password for access and placing participants into a waiting room so that the host can admit them individually after verifying their identity.

Perri attended about 10 hours of Zoom calls, during which he took copious notes and wrote down the names of the other participants – about 114 people.

While Perri was pretending to still be interested in a Smash franchise, he and a frat brother formed a competing business and bought the name “Smash My Trash” from Google AdWords, so that his company would come up on top in search results. Perri’s company launched in March 2020.

Smash sought a preliminary injunction to shut down Perri’s business. The court noted that in order to get an injunction Smash would need to show that Perri obtained and used Smash’s confidential information.

The court found that Smash didn’t properly protect its trade secrets (assuming any were disclosed on the Zoom calls):

Assuming for the sake of analysis that Smash had protectable trade secrets, Smash did not take reasonable steps to protect their secrecy. Smash freely gave out the Zoom information for the Franchisee Forum Calls and the Founder Calls to anyone who had expressed interest in a franchise and completed the introductory call. Smash used the same Zoom meeting code for all of its meetings. Smash did not require those participants to enter a password and did not use the waiting room feature to screen participants. Anyone who had expressed interest and received the code could join the calls, and participants could readily share the code with others.

This case serves as a reminder that trade “secrets” will only be protected by the courts only if they’re actually treated as valuable secrets by their owners. Sharing “secrets” in a public Zoom meeting means those “secrets” aren’t “secret” at all.