How to Protect Your Products (and Your Business) Using Design Patents 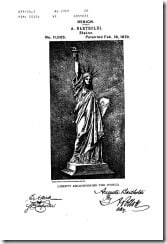 When most people think about patents, they often think about inventions and machines – something along the lines of Thomas Edison’s lightbulb.

But patents – specifically design patents – can also protect the ornamental, non-functional elements of a product.

Sculptor Auguste Bartholdi was granted a design patent for his design of the Statue of Liberty (properly known as “Liberty Enlightening the World”), which covered small copies of the statue. The sale of the small copies helped pay for the giant statue in New York harbor.

Design patent protection allows the patent owner to take action to prevent a substantially similar object from being made, used, copied, or imported into the US.

The process for applying for a design patent is described in the US Patent and Trademark Office (USPTO) Design Patent Application Guide.

As the USPTO describes it,

Unlike utility patents, which protect the way an item works and can include any number of claims, a design patent application can include only a single claim.

A single item can be covered by both utility and design patents. For example, on one day in 2020, the USPTO officially published 41 newly granted patents for the iPhone 11, covering things like the textured back glass, AirPod enhancements, and the Force touch feature.

Once a design patent is granted, the owner can enforce its rights against copycats in various ways:

In 2019, the Counterfeit Goods Seizure Act of 2019 (CGSA) was introduced to the US Senate, proposing an amendment to 19 U.S.C. § 1595(a)(c)(2)(C). If it becomes law, the CGSA would give US Customs officials greater power to enforce recorded design patent rights at the border by seizing infringing goods. Unfortunately, the progress of the CGSA seems to have stalled.