When is prior art “analogous”?

In same field of endeavor, 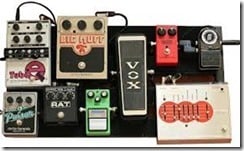 In the recent case of Donner Technology, LLC v. Pro Stage Gear, the Federal Circuit considered how to determine whether prior art was “analogous” for the purposes of determining the patentability or unpatentability of a claimed invention.

Donner sought inter partes review of a patent owned by Pro Stage Gear for a guitar effects pedal, saying that its claims were obvious, and thus unpatentable, in light of prior art.

According to the patent,

prior art pedalboards were essentially wooden boards to which guitar effects pedals were mounted. … If multiple guitar effects pedals were used, “they must be interconnected by cables to the original source of the sound to be altered, and then connected to the amplification system.”… These cables were “inserted into the adapters on the guitar effects and arranged between the pedals on the board. The wooden board may be placed in a carrying case and the cables covered by foam so that the cables are not exposed.” …With such setups, it was difficult to change out or add new effects “because the foam must be removed to uncover the cable connections, the effect removed from the board, the cables repositioned for the new effect, the new effect positioned on the board, the cables rerouted, and the foam re-cut or replaced for the new effect.” … The ’023 patent explained that there was thus a need for “an improved pedal effects board which allows easy positioning and changing of the individual guitar effects while providing a confined and secure area for cable routing and placement.”

The patent at issue purportedly solved these problems.

Donner claimed that the Pro Stage patent was analogous to a Mullen patent for electrical relays, and that the Mullen invention was prior art because it also included “surfaces for mounting relays, cable connection openings, and area for routing cables.”

The object of the Mullen invention was

The court disagreed with Donner that Mullen was analogous, explaining:

The scope of the prior art includes all analogous art. … “Two separate tests define the scope of analogous prior art: (1) whether the art is from the same field of endeavor, regardless of the problem addressed and, (2) if the reference is not within the field of the inventor’s endeavor, whether the reference still is reasonably pertinent to the particular problem with which the inventor is involved.”

Whether prior art is pertinent, noted the court, depends on whether the inventions relate to a similar problem or purpose:

Thus, when addressing whether a reference is analogous art with respect to a claimed invention under a reasonable-pertinence theory, the problems to which both relate must be identified and compared.

The court found that the Patent Trial and Appeal Board (PTAB) had failed to identify the problem to which Mullen related, and thus failed to apply the proper standard.

The court also found that the PTAB had erred in finding Mullen analogous because:

The problems to which the claimed invention and reference at issue relate must be identified and compared from the perspective of a person having ordinary skill in the art (“PHOSITA”). … Importantly, this analysis must be carried out from the vantage point of a PHOSITA who is considering turning to the teachings of references outside her field of endeavor.