Finds there was no infringement,

Due to bad writing 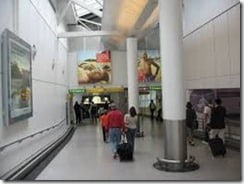 The Federal Circuit has reversed a finding of patent infringement because of claim construction that violated “grammatical principles.”

The patent notes that one way the user can avoid the roaming charges involves replacing a physical component of the phone—specifically, replacing the subscriber identity module (SIM) card inside the phone that identifies the phone to an in-reach cellular network. The user can replace the home-network SIM card … with a SIM card used for a “local” call on a cellular network in the user’s present location….

However, swapping SIM cards is “inconvenient, inefficient, and technically challenging for most subscribers, especially when traveling to multiple foreign countries.”

To avoid this, in one embodiment of the patent,

a wireless communication client uses authentication data already on a SIM card or stored in the client’s memory to connect to a local cellular network, which connects the client to the remote administration system for the purpose of retrieving information that will enable the client thereafter to become authenticated as a local device by a local network…

The preamble of Claim 8 recites:

(Emphasis in the court decision.)

That reduces the cost of calls.

SIMO, the patent owner, sued uCLoudlink and its US subsidiary, claiming that four uCloudlink products were infringing.

One issue was whether claim 8 of the patent required a “non-local calls database” and, if so, whether the allegedly infringing products had such a database.

The court noted that in Claim 8

the mix of plural, singular, and mixed-use forms of words in the list following “a plurality of” (“memory,” “processors,” “programs,” “circuitry,” “data,” “database”) leaves the phrase “a bit of a mess grammatically.”
…given the collective character of the singular-form words, the extent of the divergence from standard American English, at least as used in patents, is not entirely clear.

uCloudlink argued that Claim 8, as written, required a “plurality of . . . non-local calls database[s]” (which its product didn’t have).

The court noted that “a plurality of” means “at least two of,” and

The court also noted that there was no article (“the” or “a”) before “non-local calls database”:

If the series modifier did not apply to all members of the group, a relevant artisan would expect an “a” before “non-local calls database” (and perhaps “memory”). That is because “[t]he typical way in which syntax would suggest no carryover modification is that a determiner (a, the, some, etc.) will be repeated before” one of the items in the list.

The court pointed out that it was SIMO’s obligation, as the patent owner, to make sure that its patent was drafted properly:

The textual sloppiness—which SIMO had the obligation as the patent drafter to avoid—provides no significant textual counterweight to what we conclude are the decisive textual considerations already discussed that favor uCloudlink’s narrower reading of “a plurality of” as applying to each item in the list following that phrase.

The court concluded that uCLoudlink was entitled to a summary judgment of noninfringement.

If the preamble had been written in proper English, the plaintiff might have prevailed in this case.