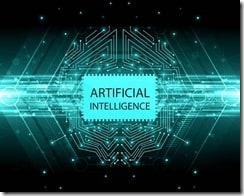 As we discussed in this blog, the definition of “artificial intelligence” is somewhat murky. It encompasses everything from the branch of computer science in which computers simulate intelligent behavior to the point where computers can pass the Turing test (also known as the “imitation game”) and thus (by Turing’s definition) actually are intelligent.

Recently, as we talked about here, a group at the University of Surrey has contended that two patent applications filed with patent offices around the world are for items designed by an artificial intelligence named DABUS, “mentored” by human beings, and thus that DABUS should be named as the inventor.

According to a 2019 report by the World Intellectual Property Organization (WIPO),

Since artificial intelligence emerged in the 1950s, innovators and researchers have filed applications for nearly 340,000 AI-related inventions and published over 1.6 million scientific publications.

Notably, AI-related patenting is growing rapidly: over half of the identified inventions have been published since 2013.

AI-related patent applications are more prevalent in some fields than others. According to WIPO,

Twenty application fields were identified in the present analysis and at least one was mentioned in 62 percent of the total identified AI patent data. These include, in order of magnitude: telecommunications (mentioned in 15 percent of all identified patent documents), transportation (15 percent), life and medical sciences (12 percent), and personal devices, computing and human–computer interaction (HCI) (11 percent). Other sectors featuring in the results include banking; entertainment; security; industry and manufacturing; agriculture; and networks (including social networks, smart cities, and the Internet of things).

Many AI-related inventions can be used across different industries.

IBM has the largest portfolio of AI patent applications with 8,290 inventions, followed by Microsoft with 5,930. Both companies’ portfolios span a range of AI techniques, applications, and fields, indicating that these companies are not limiting their activity to a specific industry or field. Rounding out the top five applicants are Toshiba (5,223), Samsung (5,102), and NEC (4,406). The State Grid Corporation of China has leaped into the top 20, increasing its patent filings by an average of 70 percent annually from 2013 to 2016, particularly in the machine learning techniques of bio-inspired approaches, which draw from observations of nature, and support vector machines, a form of supervised learning.

Although the WIPO study focuses on patents, AI innovations can also be protected under copyright and trade secret law.

The term of copyright protection is much longer than the term of patent protection. In the United States, when a company owns the copyright as a work-for-hire, the term lasts for 120 years from creation or 95 years from publication, whatever comes first.

The term of patent protection in the US, on the other hand, is only 20 years.

In other words, copyright law protects only the specific lines and sequences of code – not what the code accomplishes. Patent law, on the other hand, can protect the functionality of the code from unauthorized use – regardless of what lines of code are used to perform the functions.

A third method of protecting AI-related innovations involves trade secret law. Trade secrets are governed by both state and federal law and cover information that:

Trade secret litigation can arise when someone has violated the protections the trade secret owner has put in place – for example, violating an NDA, improperly taking company information when starting a new job, or engaging in corporate espionage.

An effective intellectual property strategy to protect AI innovations might involve one or all of the methods discussed above.