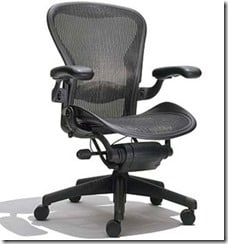 The Ninth Circuit has ruled in favor of furniture designer Herman Miller in the company’s trade dress infringement lawsuit against a maker of copycat office chairs.

Herman Miller alleged that OSP infringed its trade dress rights in the designs under the Lanham Act.

The case went to trial, and a federal jury found that Herman Miller, Inc.’s registered and unregistered EAMES trade dresses were protectable and that OSP had willfully infringed them. HM was awarded $3.4 million in infringement damages and another $3 million in dilution damages.

OSP was also enjoined from continuing to sell its infringing chairs.

As for the Aeron chair, the jury found that HM’s registered and unregistered claimed AERON trade dresses were unprotectable because they were “functional.”

HM’s trademark for the Aeron chair was also invalidated.

Herman Miller, Inc. introduced the first Thin Pad Eames chair in 1958, and has sold hundreds of thousands of them in the United States, along with a related line of Soft Pad Eames chairs. The Aeron chairs were introduced in 1994 and were even more successful; by the time of trial, HM had sold 6.5 million of them in the United States. The Eames and Aeron chairs come in a range of models, and versions of each have been exhibited in American art museums and made repeated appearances in American pop culture.

The court also noted that

The court explained that

In addition to using distinctive names, logos, packages, or labels to identify its products, a seller can also design the products themselves to have distinctive, source-identifying appearances. Such appearances can receive protection under trademark law against infringement and dilution

But in order for a product design to be protected under trademark law, it must be nonfunctional.

(Patent law, on the other hand, protects functional designs.)

What’s the difference between “functional” and “non-functional” trade dress? As the court acknowledges, ‘“functionality” is a legal term of art, undefined by statute, around which a complicated legal doctrine has developed.’

The US Supreme Court has split functionality into two types, each with its own legal test:

The court rejected OSP’s argument that the Eames chairs overall appearance was functional because it includes elements that are functional:

As for the Aeron chair, the court found that the jury instruction on functionality was improper and ordered a new trial on that basis.