Bridal Dress Designer Barred from Using Her Own Name

From using her own name on 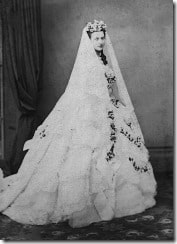 A New York federal court granted a fashion brand a preliminary injunction preventing its lead designer from using her own name commercially and on her social media accounts.

Hayley Paige Gutman agreed to work for Plaintiff, JLM Couture, a company in the luxury bridal design and manufacturing industry, as a designer of brides’, bridesmaids’, and evening wear and related apparel.

The contract was extended through August of 2022. It provides for termination by JLM with or without cause but includes no provision permitting Gutman to terminate it unilaterally.

In the contract, Gutman granted JLM certain exclusive rights to use and trademark the name “Hayley Paige” and variations thereof.

Gutman was compensated for these rights:

Explicitly in exchange “for the assignment to the Company of the Designer’s Name and the Trademarks,” JLM agreed to pay Ms. Gutman as consideration, in addition to her base pay and additional sales volume-related compensation, and for ten years following the termination of her employment with the company, a further percentage of “net revenues derived from the sale of goods under the Designer’s Name and Trademarks based on the Designer’s [N]ame.”

Gutman told JLM that she had an attorney review the contract while it was being negotiated but later admitted that wasn’t true.

The contract also includes a covenant not to compete.

Gutman eventually became the star of the “Say Yes to The Dress” reality TV show on the TLC Network.

JLM provided content for these accounts, which were used to promote its brand.

Starting in 2020, Gutman entered into “influencer” deals for products like salad dressing and nutritional supplements.

After the parties entered into unsuccessful negotiations to amend the contract. Gutman blocked JLM’s access to her Instagram account, which at that point had more than a million followers, and told JLM that she wouldn’t be posting any more JLM content on it.

JLM sought and was granted a temporary restraining order (TRO), ordering Gutman to turn over control of the Instagram account and certain other social media accounts.

Shortly thereafter, Gutman posted a series of public video statements, via another Instagram account, announcing that she had decided to resign from JLM.

Insider provides a more detailed chronology of the events associated with this lawsuit.

When JLM then sought a permanent injunction, the court noted that

The Contract is… for a definite term and it includes no provision empowering Ms. Gutman to terminate it unilaterally. … Because the Contract does not provide for unilateral termination by Defendant, her announced resignation was ineffective to extinguish her duties as an employee thereunder. …

While a preliminary injunction cannot enforce the Contract to the extent it requires Defendant to perform personal services through the Term of the Contract … a preliminary injunction can prohibit Ms. Gutman from engaging in conduct that would breach Contract provisions that apply during her Term of employment. Here, the relief sought by Plaintiff includes prohibitions on actions involving the commercial use of Ms. Gutman’s name, which has been trademarked pursuant to the Contract, and variations thereof.

Thus, the court granted the injunction.

As Jezebel reported, Gutman has since sued Joseph Murphy, the CEO of JLM Couture, alleging that he sexually harassed her and otherwise created a hostile work environment. She said that she started carrying an X-Acto knife around the office to protect herself.