Be replaced by DCA; 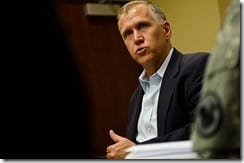 The proposed Digital Copyright Act of 2021 (DCA) would further modernize US copyright law.

According to Tillis’s office,

The DCA amends key provisions for combatting online copyright piracy, improves the exemptions available to users for circumventing technological protection measures (TPMs), increases attribution protections so that authors can be properly credited, and makes the Register of Copyrights a Presidential appointee and places the Copyright Office under the Department of Commerce.

The DMCA was enacted in 1998, in the early days of the Internet.

The DMCA bill was heavily supported by the content industries—Hollywood, the music business and book publishers—during its legislative journey through the U.S. Senate and House of Representatives. The DMCA was written in order to strengthen existing federal copyright protections against new threats posed by the Internet and by the democratization of high technology. But included in the legislation as it was eventually enacted was a “safe harbor” provision granting companies operating platforms for user-contributed content protection from liability for acts of copyright infringement by those users. It was this provision that the operators of file-sharing platforms like Grokster and Napster tried to hide behind during their unsuccessful attempts to defend themselves against DMCA-inspired litigation in the early 2000s.

Among other things, the DMCA authorized copyright holders to issue “takedown” notices to internet services providers (ISPs such as Comcast), web hosts (for example, GoDaddy), and operators of websites on which allegedly infringing material appeared. Collectively, these are known as “online service providers.”

Online service providers that host user content also need to REGISTER a DMCA agent in order to take advantage of the legal protections of the DMCA.

If a copyright owner claims infringement, it can send the host site a notice that meets various requirements, including identifying the infringed work.

The online service provider then must expeditiously remove or disable access to the allegedly infringing material.

If the online service provider fails to do this, it loses its “safe harbor” protection from liability for copyright infringement.

The person who posted the material that’s taken down can also object to its removal.

For example, in 2007, the musical artist Prince noticed a 29-second YouTube video of a toddler dancing to his 1964 “Let’s Go Crazy.” It was posted by the toddler’s mother. Universal Music, acting as Prince’s music publisher, removed the video along with about 200 others that is deemed to violate the law.

However, Stephanie Lenz, the mother of the toddler, appealed the takedown on the grounds that the song clip was barely audible in the background. Since Universal didn’t file suit for infringement, the video was restored.

The proposed DCA would include a “notice and staydown” provision. Not only would the online service provider have to remove infringing material when the copyright owner complains, it would also have to do a continuing search for the infringing material or use filters so that it’s not reposted. This is similar to the European Union’s Directive on Copyright in the Digital Single Market, which also has a notice-and-staydown system. This can make it easier for online service providers with users worldwide since they could then have a single process for both the US and the EU.

The full text of the proposed legislation can be found here.