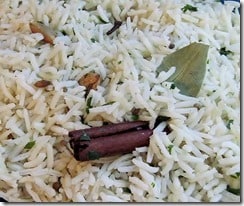 What happens when two nuclear-armed nations go to war – over rice?

For about ten years, India and Pakistan have each been attempting to claim exclusive rights to use the Geographical Indication (GI) for Basmati rice in the European market.

A GI, as the European Commission explains, is very much like a trademark. It’s “a distinctive sign used to identify a product whose quality, reputation or other such characteristics relate to its geographical origin.”

Under EU rules, certain wines, spirits, agricultural products, and foodstuffs may only be marketed using certain names if they were actually produced in specific regions associated with those names.

But GI rules don’t only apply in the EU. The World Intellectual Property Organization (WIPO) notes that

A geographical indication (GI) is a sign used on products that have a specific geographical origin and possess qualities or a reputation that are due to that origin. In order to function as a GI, a sign must identify a product as originating in a given place. In addition, the qualities, characteristics or reputation of the product should be essentially due to the place of origin. Since the qualities depend on the geographical place of production, there is a clear link between the product and its original place of production.

GIs are covered under the Paris Convention for the Protection of Industrial Property and by the World Trade Organization’s (WTO’s) Agreement on Trade-Related Aspects of Intellectual Property Rights (TRIPS).

Some examples of Geographical Indications include:

A Protected Geographical Indication (PGI), shows that at least one stage of production, processing, or preparation of the item covered by the GI takes place in the designated region.

In 2009, as the Wall Street Journal explained,

Tensions between India and Pakistan have thwarted their plans to jointly own the term “basmati” for the aromatic rice, much as producers in Champagne, France, have the exclusive right to name their product.

The South Asian neighbors are big producers of the iconic long-grained rice, which is in rising demand from middle-class Indians as well as buyers in the Middle East and among Indians, and their restaurants, world-wide. India and Pakistan had planned to file a joint application for what’s called a “geographic indication” tag to lay claim to the name “basmati.”

But the basmati bandwagon has been derailed in the wake of the November’s terrorist attack on Mumbai, which was launched by militants sailing from Karachi.

More recently, India filed for PGI status in the EU in 2018. The application was published in September of 2020 and the status of the “Basmati” indication is now in the consultation stage.

If the parties aren’t able to reach an agreement, the issue will go to trial before the DG Agriculture, European Commission.