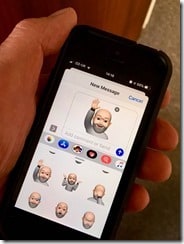 Apple has won a trademark lawsuit involving the MEMOJI mark because the plaintiff was too slow… and then too fast.

mere adoption of a mark without bona fide use in commerce, in an attempt to reserve rights for the future, is insufficient to establish rights in the mark under the Lanham Act. Use in commerce requires use of a genuine character, in a way sufficiently public to identify or distinguish the marked goods in an appropriate segment of the public mind.

The court’s opinion is full of juicy details, many suitable for an episode of HBO’s Silicon Valley.

The United States Patent and Trademark Office (USPTO) granted a Notice of Allowance in early 2018. This meant that Social Tech needed to prove that it was using the mark in commerce within a specified time.

The examination of Lucky Bunny’s application was suspended until the final disposition of Social Tech’s application.

In 2018, Apple contacted Social Tech about acquiring the MEMOJI mark. Social Tech rejected this offer. Apple then contacted Lucky Bunny and bought its MEMOJI rights, uncertain as they were at that point.

In June 2018 Apple released a public beta version of a new operating system that incorporated its Memoji software just a few weeks after it acquired the MEMOJI mark rights from Lucky Bunny.

After 2016, when it first filed its trademark application for the MEMOJI mark, and before Apple’s product release in 2018, Social Tech made some efforts to develop a business plan and market the idea of a Memoji app to potential users and investors. It set up a website and secured $100,000 in funding from a single employee investor. The company talked to a software developer before Apple’s launch but didn’t actually have any code written.

Once Apple announced its own Memoji app, Social Tech shifted into high gear. Just three weeks later, it launched its Memoji mobile phone application on the Google Play Store. Two days later, it filed its Statement of Use with the USPTO.

During the weeks after Apple’s announcement, Social Tech’s co-founder and president, Samuel Bonet, exchanged emails with a software developer, urging the acceleration of the development process. As the court noted,

In the first of these emails on June 7, Bonet described the circumstances to be “life changing” and concluded the email with: “Time to get paid, gentlemen.” In a series of subsequent emails, Bonet regularly followed up with the developer on the application’s progress. On June 12, Bonet wrote: “the app needs to erase the background AND the body . . . Of course this may take a little work to get perfect, but as long as we can get close initially, we can start to test and put in commerce.” On the evening of June 13, Bonet wrote to the developer: “[i]n other news . . . the initial letter has been sent to Apple. The process has begun. Peace and wealth!”

We are lining up all of our information, in preparation for a nice lawsuit against Apple, Inc! We are looking REALLY good. Get your Lamborghini picked out!

Apple commenced a proceeding with the USPTO to cancel Social Tech’s MEMOJI mark. Social Tech then filed suit against Apple for trademark infringement.

The district court “granted summary judgment in favor of Apple on the ground that no reasonable jury could find that Social Tech engaged in bona fide use of the MEMOJI mark in commerce within the meaning of the Lanham Act,” which governs trademarks.

Social Tech appealed, and the Ninth Circuit agreed with the court below:

While more than two years went by from the filing of its initial intent-to-use application, Social Tech developed no code for its Memoji application and had no sales. The scope of Social Tech’s activities prior to Apple’s announcement of its Memoji application — its maintenance of a website containing promotional videos, early stage business planning, a single internal $100,000 investment, and the unsuccessful solicitation of any external investors — was not sufficiently public to establish trademark rights, whether or not Social Tech executed these activities with a good faith intent to eventually use the mark in commerce.

The fact that Social Tech rushed to get its app on the market after Apple’s announcement didn’t help its case. As the court noted:

The correspondence compels the conclusion that Social Tech’s intention to develop and release its Memoji application was not a bona fide engagement of the mark in commerce, but merely an attempt to reserve its MEMOJI trademark and provide a basis for its lawsuit against Apple. We do not suggest that rushing to develop a product or releasing a product of low quality are themselves sufficient to preclude a finding of bona fide use in commerce. But here, Social Tech fails to provide any evidence that its use of MEMOJI was bona fide.

The lesson here is that when it comes to “use in commerce,” if you snooze you lose. And don’t count your Lamborghinis before they hatch.