Not the same as assignment: 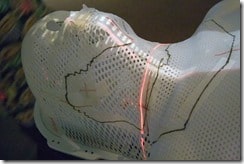 The Federal Circuit has affirmed a federal district court’s denial of Apple’s motion to dismiss a patent infringement case.

Dr. Islam is a tenured professor of electrical and computer engineering at the University of Michigan (UM). When Dr. Islam joined UM, he signed an employment agreement that included a provision agreeing to abide by UM’s bylaws.

UM Bylaw 3.10 “stipulates the conditions governing the assignment of property rights to members of the University Faculty and Staff” and includes the following terms:

1) Patents and copyrights issued or acquired as a result of or in connection with administration, research, or other educational activities conducted by members of the University staff and supported directly or indirectly (e.g., through the use of University resources or facilities) by funds administered by the University regardless of the source of such funds, and all royalties or other revenues derived therefrom shall be the property of the University. * * *

4) Patents, copyrights, and property rights in computer software resulting from activities which have received no support, direct or indirect, from the University shall be the property of the inventor, author, or creator thereof, free of any limitation which might otherwise arise by virtue of University employment.

5) In cases which involve both University-supported activity and independent activity by a University staff member, patents, copyrights, or other property right in resulting work products shall be owned as agreed upon in writing and in advance of an exploitation thereof by the affected staff member and the Vice-Provost for Research in consultation with the Committee on Patents and Copyrights and with the approval of the University’s Office of the General Counsel. It is understood that such agreements shall continue to recognize the traditional faculty and staff prerogatives and property rights concerning intellectual work products.

[Emphasis added by the court.]

After the patents were granted, Dr. Islam assigned the patent right to Omni. One of those patents is an ancestor to the patents in the Apple dispute.

In 2018, Omni sued Apple for the alleged infringement of two patents. Apple sought to dismiss for lack of standing, alleging that UM, not Omni, owned the patents:

Apple argued that Dr. Islam agreed “to abide by all University rules and regulations” including UM bylaw 3.10 when he joined the UM faculty. Apple specifically argued that paragraph 1 of bylaw 3.10 automatically transferred legal title to the patents at issue to UM, leaving Dr. Islam with no rights in the invention to assign to Omni. Apple thus contended that Omni lacked standing to assert the patents against Apple.

The district court concluded that paragraph 1 of bylaw 3.10 was not a present automatic assignment of title, but, at most, a statement of a future intention to assign.

Omni’s standing to assert the patents at issue turns on whether it has an exclusionary right in the asserted patents. This turns on a legal question of contract interpretation: whether paragraph 1 of bylaw 3.10 automatically and presently assigned legal title of Dr. Islam’s inventions to UM.3 A patent assignment clause may presently assign a to-be-issued patent automatically—in which case no further acts to effectuate the assignment are necessary—or may merely promise to assign the patent in the future.

The court concluded that

paragraph 1 of bylaw 3.10 does not unambiguously constitute either a present automatic assignment or a promise to assign in the future. … It does not say, for example, that the inventor “will assign” the patent rights—language that this court has previously held to constitute an agreement to assign rather than a present assignment.