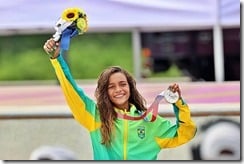 A teenage Olympic medalist discovered she’d gotten another prize on her return to Brazil: the rights to her own name.

As Reuters reported, 13-year-old Rayssa Leal (shown above), who won a silver medal in the Tokyo Olympics in skateboarding, arrived home to find that a lawyer she didn’t know (let alone hire) had trademarked her nickname.

Leal is known as “Fadinha” — “Little Fairy” in Portuguese. She earned the nickname when a video of her doing skateboard tricks in a fairy costume went viral in 2015 after it was shared by skateboarding superstar Tony Hawk.

The lawyer, Flavia Penido, said she applied to the trademark for the “Little Fairy” mark after she watched Leal’s performance and checked to see whether anyone else had already registered the mark for skateboards or skateboard apparel.

Rather than profiting off the mark herself (as many others might be tempted to do), Penido said she would assign her rights to Leal or her parents at no charge.

(Of course, the lawyer earned a lot of positive publicity when she told the world what she’d done.)

Trademark laws vary around the world. Some countries, like Brazil, use a “first to file” system. Other countries, including the US, require an application that includes the following assertions under penalty of perjury:

Thus, registering a mark with the intent to give it to someone else as a gift would not be legitimate in the United States. It would even be a criminal offense.

“Trademark Squatting” is “a situation in which someone other than the original brand owner obtains a trademark on a brand,” as the World Intellectual Property (WIPO) site explains.

The brands being “squatted” on are usually well-known.

As the US Patent and Trademark Office (USPTO) explains,

Here’s a scary situation: let’s say you manufacture or sell your product outside the United States, or you plan to in the future. Things are going well. Orders are steady, interest is widespread, and you see demand in other markets. When you’re ready to expand into one of those markets, you discover someone else has already registered your trademark there. Not only can you not register your own brand, but the current owner may now actually control your ability to manufacture and sell your product in that country.

Unfortunately, many U.S. companies have confronted situations like this over the years.

Many US companies don’t realize that trademarks (like patents but (mostly) unlike copyrights) are territorial. Registration in one country doesn’t protect you in any other country.

As the USPTO notes,

Research conducted several years ago by the United States Patent and Trademark Office (USPTO) revealed that only 15 percent of small businesses doing business overseas know that a U.S. trademark provides protection only in the United States. This lack of knowledge about territoriality can create significant problems for U.S. companies, especially in today’s global economy.

Trademark squatters take advantage of the “first to file” system that exists in some countries, as noted above.

This can cause serious problems, as the USPTO notes:

Registering a trademark first in the US can make it easier to register abroad. As the USPTO explains,

Using a trademark application or registration issued by the USPTO as a basis for file through the Madrid Protocol, which provides a cost-effective and efficient way for trademark holders (individuals and businesses) to protect their marks in multiple countries by filing one application through the USPTO, in one language, with one set of fees in one currency.