When does a printed publication count as prior art in an IPR?

Has to be accessible

To be prior art 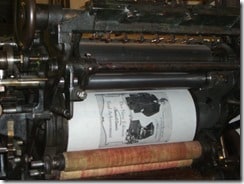 An inter partes review (IPR) is a procedure for challenging the validity of a United States patent before the United States Patent and Trademark Office (USPTO).

An IPR is used to challenge the patentability of one or more claims of a patent that’s already been granted – essentially arguing that the USPTO made a mistake in granting it.

A person shall be entitled to a patent unless—

Section 103 deals with obviousness. In order to be patentable, a claimed invention must not have been obvious to a “person having ordinary skill in the art” (PHOSITA) in view of the appropriate prior art.

So what’s “prior art”?
As the European Patent Office (EPO) explains,

Prior art is any evidence that your invention is already known.

Prior art does not need to exist physically or be commercially available. It is enough that someone, somewhere, sometime previously has described or shown or made something that contains a use of technology that is very similar to your invention.

An existing product is the most obvious form of prior art. This can lead many inventors to make a common mistake: just because they cannot find a product containing their invention for sale in any shops, they assume that their invention must be novel.

The reality is very different. Many inventions never become products, yet there may be evidence of them somewhere. That evidence – whatever form it may take – will be prior art.

Patent attorneys commonly conduct prior art searches for their clients seeking to patent new inventions, to try to determine whether any such prior art exists that would lead to the patent not being granted – or to it being invalidated via the IPR process.

It’s usually sensible to perform such a search before investing a significant amount of time and money in drafting and prosecuting a patent application.

However, to be relevant prior art can’t just be buried in some inaccessible bank vault.

In a recent decision, the PTAB found that the petitioner failed to demonstrate a reasonable likelihood that the primary prior art reference was publicly accessible.

The prior art article was allegedly published online in the summer of 2016, but the copy that the petitioner submitted didn’t have a publication date.

The petitioner submitted an affidavit from the Internet Archive stating the article became available as early as July 18, 2016. However, there was an issue about whether a key illustration was part of that original online publication.

The PTAB found that the Internet Archive material wasn’t sufficient evidence of the publication of the entirety of the article, including the illustration, more than one year before the filing date of the patent at issue.