To be one market 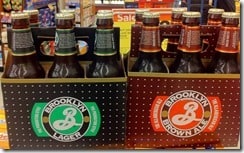 In October, the United States Court of Appeals for the Federal Circuit affirmed a decision by the Trademark Trial and Appeal Board (TTAB) that canceled the trademark of the Brooklyn Brew Shop.

The Brooklyn Brewery Corporation (“Brewery”) brews and sells craft beers, which it sells to retailers throughout the United States. As the Federal Circuit noted,

For more than thirty years, Brewery has used the marks BROOKLYN and BROOKLYN BREWERY in connection with the advertising, promotion, and sale of Brewery’s beer and beer-related merchandise. Among other registrations, Brewery owns Registration No. 3,186,503 for BROOKLYN BREWERY for beer in Class 32,1 registered in 2006.

Another brewery, Brooklyn Brew Shop, LLC’s (“BBS”), was founded in Brooklyn in 2009 and sells kits for making beer, wine, and hard cider all over the US. It also sells related products like sanitizing preparations for the equipment.

In 2011, BBS applied for registration of the mark BROOKLYN BREW SHOP in Class 32 for “Beer making kit[s],” claiming first use in March 2009. The USPTO registered the mark the same year.

Three years later, BBS filed another trademark application for BROOKLYN BREW SHOP in stylized form. Unlike the previous registration, which was limited to beer-making kits, the new application sought registration for a wide variety of goods including:

Brewery filed a petition for cancellation of the earlier BBS mark and a notice of opposition to the second application:

The TTAB denied the petition for cancellation and sustained in part and reversed in part the opposition. Brewery appealed.

On appeal, BBS argued that Brewery lacked standing to appeal the TTAB’s decision under Article III of the U.S. Constitution, which limits federal courts to hearing “Cases” or “Controversies.”

To meet the constitutional minimum for standing, the party seeking to invoke federal jurisdiction must satisfy three requirements.” Consumer Watchdog, 753 F.3d at 1260–61 (citing Lujan v. Defs. of Wildlife, 504 U.S. 555, 560 (1992)). First, the party must show that it has suffered an “injury in fact” that is both “concrete and particularized” and “actual or imminent.” Lujan, 504 U.S. at 560–61 (internal quotation marks omitted). Second, it must show that the injury is fairly traceable to the challenged action. Id at 560. And third, the party must show that it is “likely,” rather than “merely speculative,” that a favorable judicial decision will redress the injury.

To establish such injury in a trademark case,

an opposer must demonstrate a concrete and particularized risk of interference with the rights that flow to it from registration of its own mark, or some other Article III injury. This does not require that an opposer show that it faces a risk of potential trademark infringement liability, though that could be sufficient to establish standing. It may also establish standing by showing that if a mark is not canceled, or if an application is granted, the very registration and use of the mark would cause the opposer concrete and particularized harm.

the test for likelihood-of-confusion or descriptiveness purposes is whether the challenger and registrant compete in the same line of business and failure to cancel an existing mark, or to refuse registration of a new mark, would be likely to cause the opposer competitive injury.

Brewery, unlike BBS, doesn’t make or sell sanitizing preparations, so the court held it had no standing to challenge BBS’s registration of the mark for such products.

However, the court noted that the TTAB had found that

This was enough, held the court, to establish Brewery’s standing to challenge the marks for beer-making kits.